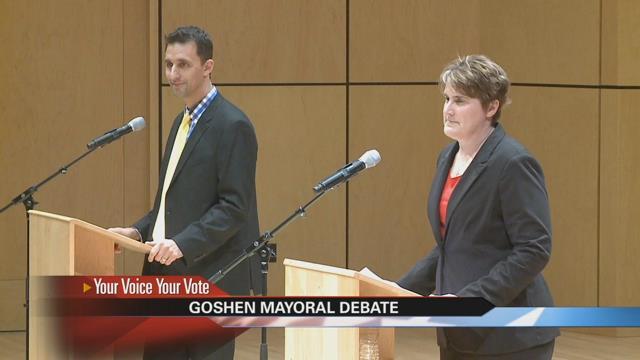 In eight days the city of Goshen will know who their new mayor will be. The current Mayor Allan Kauffman has served over 18 years in office.

On Monday the two mayoral candidates, Republican Mary Cripe and Democrat Jeremy Stutsman, participated in a final debate before the November 3 election.

For over 18 years Mayor Kauffman has walked the steps into city hall. Now as two candidates compete to take office, Kauffman hopes who ever becomes the next mayor can continue his work of improved roadways, neighborhoods, and communication.

“Quality of place is just foundational for everything. So hopefully whoever is mayor will continue on the path that we are on,” says Kauffman.

Kaufman sums up his legacy in three words ‘quality of place.’

“Everybody deserves to live in a good neighborhood and healthy neighborhoods are the foundation for a healthy community,” says Kauffman.

“My promises to you are improved transportation, that spurs development, and that development attracts people here,” says Cripe.

“I can’t promise you that you will agree with every decision I make but I can promise that those decision will be educated well thought out and discussed amongst the community,” says Stutsman.

Community members brought up a lot of the same issues Mayor Kauffman hopes to see the next mayor address.

“We need to make sure these road projects are not only happening on time to obstruct traffic as little as possible but also on budget,” says Stutsman.

“Now we need to look for the next 20 years. We need to see what our needs are for the future,” says Cripe.

“It can’t just be the police officers working. It has to be neighborhoods working together with the police department,” says Cripe.

“We are under the number of police and fire men we should have in our area. We need to make sure we are being efficient with our budget so that we can provide the services that this community deserves,” says Stutsman.

Mayor Kauffman also hopes the next mayor can keep strong lines of communication with community groups.

Stutsman says he hopes an updated city website will improve lines of communication.

Cripe says she would use Facebook, mailers, any means possible to get information out to the community.