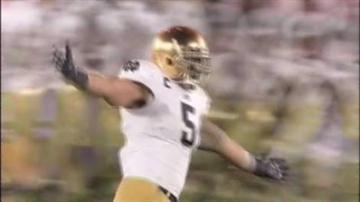 SOUTH BEND, Ind. — Even though Manti Te'o finally spoke out about the hoax that captured a nation, there are still more details coming to light.

Another twist in the tangled story about Te'o's dead girlfriend who never existed. The alleged maestro behind it all, Ronaiah Tuiasosopo, called Te'o on Wednesday to confess that the woman Te'o called the "love of his life" was a fabrication.

His neighbors are still reeling from the scandal.

"I can't believe they would do something like that," said one neighbor.

Further, the alleged mastermind also once appeared on the singing competition The Voice, and came up with a similar story about a nearly fatal car crash.

Katie Couric will do an interview with Te'o and his parents on her talk show Thursday.