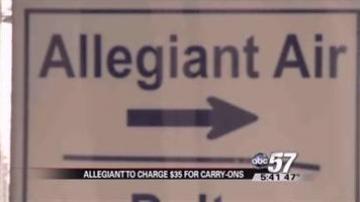 It turns out there's a cost with choosing a so-called "discount" airline.

Allegiant Air is now the second carrier that will start charging as much as $35 for carry-on bags. Folks will still be allowed one personal item like a purse or laptop bag free of charge.

Flyers will have to pay for anything bigger.

"I’ll probably go back to a larger carrier, because it is an inexpensive flight and you start adding all those fees it gets to be ridiculous,” said Chuck Medlock.

"I really don't like it because the flight tickets are expensive as they are,” said Marie Tumar. “It's the right of the passenger to be able to carry on baggage."

Passengers who pay online and in advance for carry-on bags on Allegiant could save a few bucks.