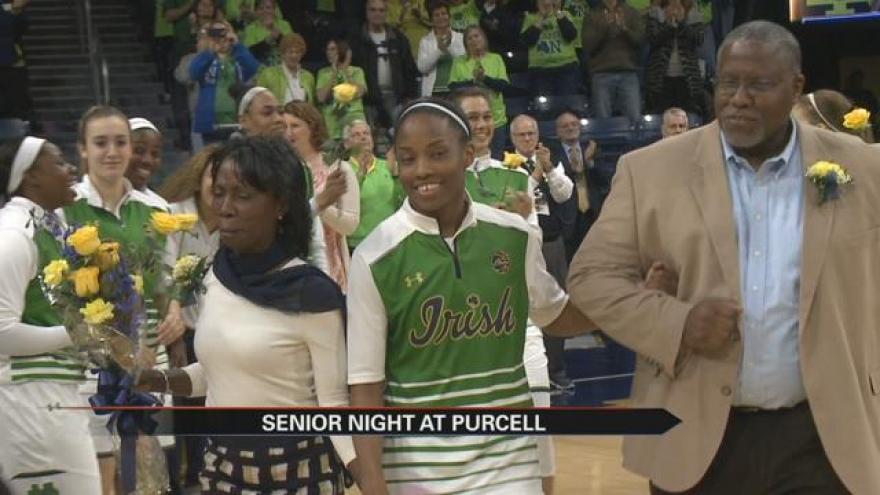 Notre Dame guard Lindsay Allen will go down as one of the greatest players in program history, and for the past four years, Head Coach Muffet McGraw says Allen has made each day a walk in the park.

"I'm telling ya, having Lindsay has made my job so much easier. She is such a coach on the floor," McGraw said.

The Irish's floor general has made her mark in a variety of ways but nothing can compare to her vision.

"It's a gift that sometimes you don't appreciate as much until she's not in the game. The things she can see and how she can deliver the ball exactly at the right moment to whoever is open in a particular way of a pass that they're going to be able to catch," McGraw said.

However, McGraw says Allen's durability is the thing she admires and appreciates the most.

"She's the iron man, I don't think she's ever missed a minute of practice in fact even when we're trying to get her off, she's back on the floor," McGraw said.

And the Irish have needed her for every minute of every game she's played in this season.

"It's very difficult I don't think people realize how hard it is to have to think for everybody on the floor at all times to know where everybody else is supposed to be; to know what we're supposed to be running, where they have to be, what we're doing defensively, when are we trapping, so many things she's doing for us," McGraw said.

All the accolades, Allen says, will be something she can look back and be proud of, but it's the grind she and her teammates go through off the court, in the weight room that really resonate with her.

"Being able to get through those moments and being able to see that translate to our on court success have been one of my most proud moments," Allen said.

A journey that started four years ago, winding down to the end in just a few short weeks.