Alley trash not being picked up 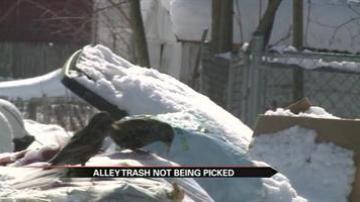 SOUTH BEND, Ind. -- Non-stop snowfall has made it hard for some city crews to do their jobs.  Alley ways are jammed with snow which is leaving one South Bend neighborhood with a week's worth of trash and a bill.

“This is our trash bill saying we are still getting charged for trash pick up,” said South Bend resident Eric Davis.

Even though the city of South Bend has not picked up their trash in weeks, the bills keep coming.

“We are not sure what is going to happen once they get filled," said Davis. "You can see they are already filled up.”

Three weeks worth of trash is left along the alleys of this South Bend neighborhood on O'Brien Street.

The trash trucks cannot get through the alley because of the snow and the city told residents it will not plow the alley.

“The reason we were given was that our alleys were not clear and they do not want to damage their equipment doing a pick up,” said Davis.

But Davis says the neighborhood has made a solid effort to make a drivable path.

“The neighbors all pitch in and we get someone to plow out the ally and we come out and shovel out and try to get it out as much as we can in hopes that the city can finish off what they need to or get down for a pick up,” says Davis.

And for Dwight Howell, his duty is to take out the trash for his family, and he is not quite sure what to do with the piles.

“Four weeks, they haven’t picked nothing up," says Howell. "It’s a major deal because they don’t come and we have to pile the trash up week by week.”

The Mayor's Office asks South Bend residents to clear their alleys as much as possible so they can quickly get the trash trucks back in their neighborhood.