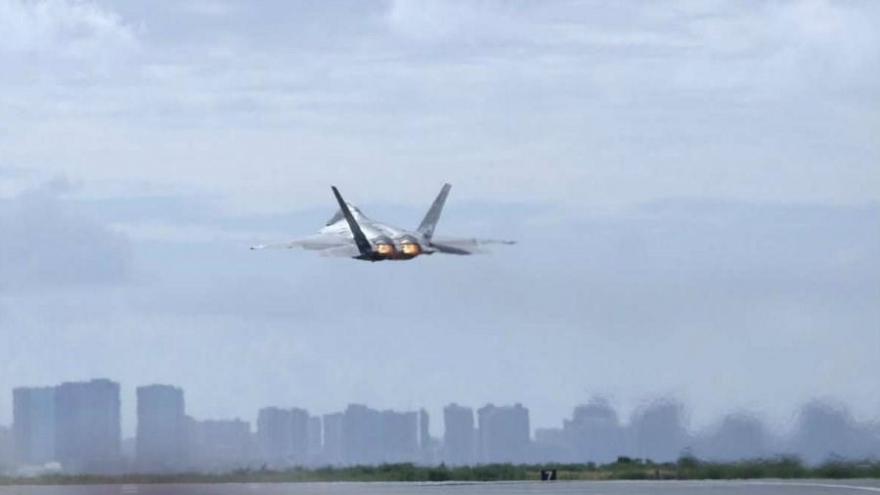 (CNN) -- A man who caused a disturbance aboard an American Airlines flight from Los Angeles to Hawaii on Friday was overpowered by passengers and crew and taped to a seat, passengers said.

Two passengers told CNN affiliate KITV a flight attendant blocked the man's path with a serving cart as he headed toward the cockpit.

"You're not coming in here," the crew member said, according to Lee and Penny Lorenzen of California.

Passengers and crew subdued the man, took him to the back of the plane and duct-taped him to a seat, Lee Lorenzens told KITV and CNN affiliate KGMB/KHNL.

"It took seconds," Lee Lorenzen told KGMB/KHNL. "He was pushing against the cart and a bunch of guys grabbed him. They found some duct tape. There were pillows and blankets. And they taped him to his chair."

The man was met by authorities when the Airbus 321 landed in Honolulu.

"Due to a disturbance during the flight, the crew requested that law enforcement meet the aircraft upon landing in Honolulu," American Airlines said in a statement.

Video from KGMB/KHNL showed two law enforcement officers escorting a person with hands behind their back off the plane.

A user on Instagram posted a video from inside the cabin, showing the person in handcuffs being led down the aisle by a man with FBI on his back.

"Crazy! Someone tried to break into the cockpit on my flight from LA to Honolulu," bplus.noisefloor.dnb wrote. "We were greeted by the FBI. They are now taking us off the plane a few rows at a time for dog sniffing and interviews. I've never seen anything like this."

The Department of Homeland Security tweeted the person was detained and that the incident appeared to be isolated.

"At this time, there are no other reports of disruptions to flights," the department tweeted. We continue to monitor all flights out of an abundance of caution and will provide updates as necessary."

Earlier the man, who purchased his ticket around midnight, had an encounter with airport personnel at the airport in Los Angeles, an official briefed on the incident told CNN. The man attempted to use a door off limits to the public in the middle of the night while waiting for his flight.

The airliner left Los Angeles International Airport at 8:43 a.m. PT (11:43 ET) for the nearly six-hour flight, according to FlightAware.com.

Two F-22 Raptors from the US Pacific Command escorted the plane for the final part of the flight, Navy Cmdr. Dave Benham said.