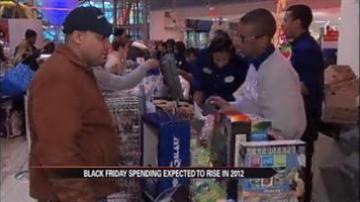 Shoppers have already lined up at the retailers around the county as the start of the holiday shopping kicks off.

And this year, shoppers are predicted to spend even more money.

A new consumer survey shows that holiday spending will likely rise between three and a half to four percent in 2012.

This would mark the fourth consecutive year for a gradual increase in holiday spending.

A sign that could point to many Americans feeling more confident about their financial situation.

"Our 2012 responses are the strongest we've seen since back in 2007, just before the recession began," said Bill Hampel, chief economist for the Credit Union National Association. "Put differently, our holiday spending survey has shown four years of improvement in a row following the abysmal readings of 2008."

The number of Americans who said they would spend more rose from eight to 12 percent over 2011. And more people surveyed also said their financial situation was better in 2012.