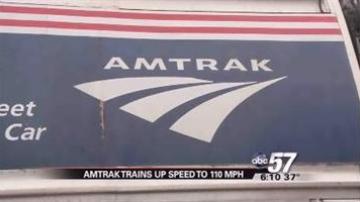 The train travels at a whopping 110 MPH from Chicago to Detroit. Officials say the new 90 mile stretch is the first in a series of high speed tracks to connect the entire Midwest region-- a move that will allow people in Niles, South Bend and other Michiana towns to commute regularly to Chicago and Detroit.

When the track is complete, the trip from Chicago to Detroit should only take about three hours and 45 minutes- that's two hours less than what it is now.

“I think it’s great because I travel from Detriot to Kalamazoo quite frequently," said David Seago, a Michiana traveler. "I switch off between taking the train and the bus depending on my schedule and there’s almost no difference in time between the bus and the train but if this cuts off an hour or so, it’s going to be great.”

Seago makes the trip between Kalamazoo and Detroit three times a month, a journey that usually takes about two and a half hours. But, with the new high speed trains, that route is at least 20 minutes faster.

But, shorter travel times aren't the only benefit of Amtrak’s new system.

The Federal Railroad Administration estimates that this high speed rail corridor will create 57,000 jobs across the region.

"Clearly, this is going to have direct jobs related to the infrastructure improvements and the service," said Kirk Steudle, Director of the Michigan Department of Transportation. "So, there’s those direct jobs but then there’s the spin off jobs that happens from the development around the stations."

In addition to creating jobs, the FRA said the railroad will draw revenue from the urban areas by enabling city commuters to live in towns like South Bend and Niles.

“At full build-out they’re going to be about a 45 minute trip to downtown Chicago,” said Szabo

“By the time you check in at Detroit-Metro, an hour and a half early, and then you know, fly to O’Hare or Midway and get off. I mean, all the hassle of that travel. I mean, you just get on a train and you’re there! So, it’s just great, it’s going to be wonderful.”

Amtrak and the FRA estimate that it will be about three years before the corridor is operating at full speed and all of the Midwest region is connected.