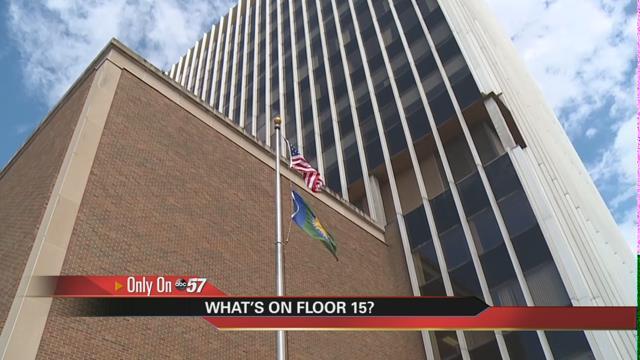 It's something most people don't even know exists. ABC 57 got an exclusive look at the 15th floor of the County City Building.

A lot of employees there don't even know about it.

So, what happens there? David Kepple is the man behind the curtain.

Kepple is 83 years old and has a life story so vast, he could write a book or two.

Kepple is in charge of Radio Communications for the St. Joseph County Emergency Management Agency.

He and about 600 other people help emergency responders in this area communicate with each other whenever something happens, and their command center is in the 15th floor of the County City Building.

“It's a back up. We're there if they need us,” says Kepple. “For any type of emergency.”

He and his team help make sure emergency responders can hear each other in case something bad happens.

Kepple says cell phones can fail and that's where they come in.

“When everything else fails, we always fall back on amateur radios,” says Kepple.

For instance, when downtown South Bend lost power back in 2014, Kepple and his team were there.

“We actually opened amateur stations in both of the hospitals,” says Kepple.

They made sure vital parts of the city were still able to communicate.

And all of their radios and antennas and fancy buttons source from the 15th floor of the County City Building.

“I've never heard of it referred to as the 15th floor. I knew it was up there but it was always kind of a mystery,” says South Bend City Clerk John Voorde.

Voorde has worked in the building since 1980 and says he's never been to or seen this level.

“I don't know, the 14th floor is where they always stop,” says Robert E. Lee a security guard for the County City Building.

A mystery to most, but a comfort to know there's something up there.

Kepple let ABC 57 follow him up to this mysterious spot.

The elevator buttons only reach to the 14th floor, so it was up three flights of stairs after that.

Once inside this James Bond-esque level, the buzz of the machinery was so loud it overpowered anyone's voice.

Kepple says that is where the magic happens. His team in their yellow vests all technologically communicate through this working zone in the County City Building that no one knew existed.

A secret to most, but a big part of  Kepple's life.

Because he knows, in part, he is a major help to the safety of St. Joseph County.

“This is something worthwhile,” says Kepple.

It's also important to note, everyone involved in this organization is volunteer and most of the radio equipment is donated.

If this is something you might be interested in, look for David and his team in the bright yellow vests at the Sunburst Race.