An inside look of Operation Warrant Reduction in La Porte County 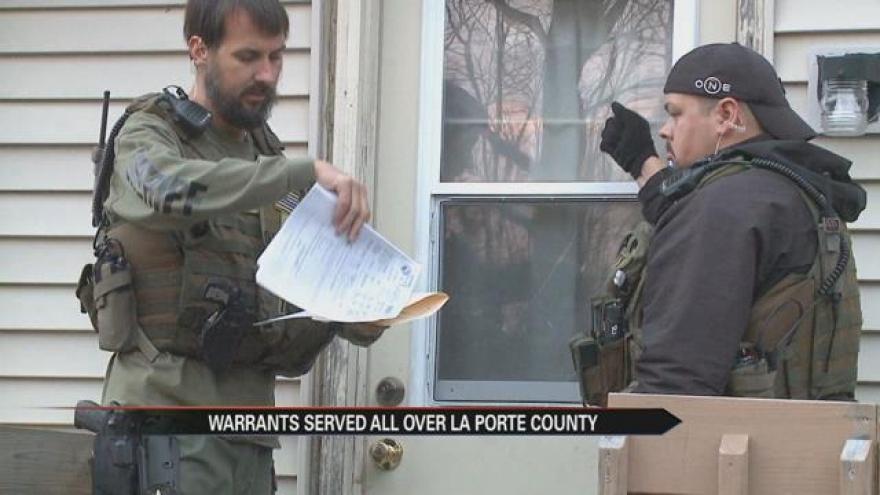 With just under 7,000 outstanding warrants in La Porte County the Sheriff's Department created what is formally known as ‘Operation Warrant Reduction.' ABC57 got to tag along.

The sun was not even out and Captain Mike Kellems warned of the dangers officers could face while on a warrant sweep in La Porte County.

“You never know when somebody is going to go sideways so if something does go bad the car is home base,” says Captain Kellems.

By 6:23 a.m. ‘Operation Warrant Reduction’ was one step closer to their goal.

“Second team in Kingsford Heights just got one,” said Kellems as the police scanner played in the back ground.

Sergeant Hynek is one of three tasked with managing warrants, county wide. On Thursday he received help from 16 other agencies who provided 100 plus officers in man power.

“All we are trying to do is do our job we get a court order to arrest someone for whatever the charge may be whether it’s a civil warrant or a warrant for murder,” says Sergeant Hynek.

“This suspect might have some weapons in the house,” explained Captain Kellems.

Getting the suspect to open the door was not easy.

“Open the door, open the door, we are coming in,” explains Sergeant Hynek as he flashed a light at the suspect through a window.

The suspect ended up opening the door questioning the officers’ motives for being at him home.

“Being calm and collective when we go in but your nerves are up when you force entry or boot a door simply because we don’t know what’s on the other side,” says Sergeant Hynek.

On the other side of another home was a lower risk suspect who owed some money. An arrest was not made.

“In a body attachment it’s not a criminal arrest warrant they will make sure they got a good address for them set up something where they can make a payment. We want to be reasonable,” says Kellems.

The US Marshals Service teamed up with the county to provide both man power and technology to help serve as many warrants as possible.

“Do I hope that eventually we run down to having none? Yes, but the reality is that’s not going to happen. So until then we have been congressionally funded to come in and assist these state and locals with trying to do our best to keep up with the warrant back log that they have,” says Shannon Robinson a Supervisory Inspector with the US Marshals Service.

Thursday was day two of the warrant sweep and as of 1:00 p.m. 40 people have been taken into custody. On Tuesday 54 arrests were made.