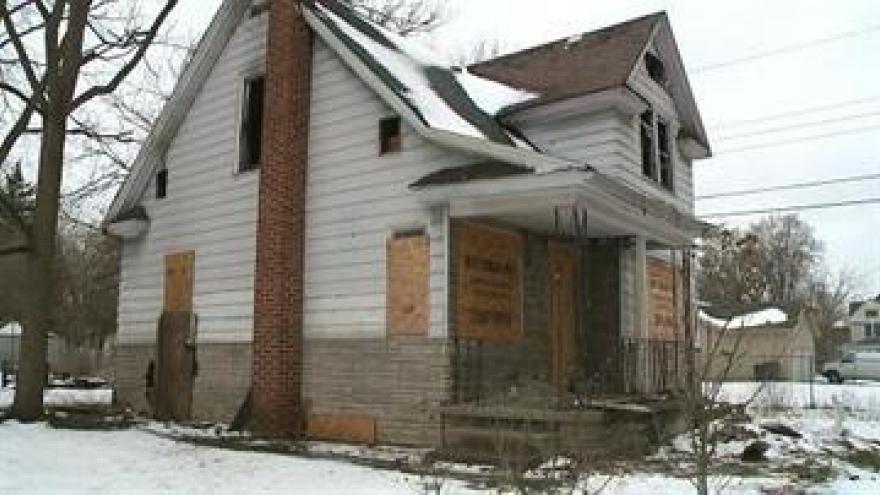 SOUTH BEND, Ind. – Over the past six months, an abandoned two-story home on Carroll Street has attracted fire-bugs and now possibly squatters with a small child.

Since last July firefighters have battled several blazes both in and outside of the house. The most recent was on November 9, 2011.

Since then, it has been quiet; while weather and time continue to take their toll on the slowly rotting structure.

Nearly every entrance is covered, but it hasn’t always been that way.

Someone set fire to the home after slipping in through uncovered basement windows last fall.

After those were boarded up, people found other ways of getting inside.

Most recently, Maranda Ramirez claimed to have seen a young man jumping out of an open first floor window and leaving the area with a woman and small male child.

The window had previously been covered according to neighbors, who only recently noticed it was missing.

Several footprints in the snow around the window indicate someone had gone in and out of the home recently; which is a dangerous prospect in itself.

There has been a fire on every floor of the home. Just one part of a window remains unbroken, and the roof is starting to sag in the middle.

For months the neighbors have been complaining about the eyesore, and several others in the immediate vicinity, to South Bend’s Code Enforcement Department.

The home was placed on a demolition list last year after several fires gutted the home but; the code enforcement department did not have the money in the budget to get rid of it.

ABC 57 was told on several occasions that as soon as the department had the funding to remove the home, they would do so.

Even before the last fire in November, it was expected to be one of the first few homes demolished in 2012.

But those demolitions have already begun and the home still stands.

In a phone call to Code Enforcement on Monday, the director of the department, Catherine Toppel, explained the situation.

Currently the home has been bid out for demolition, but the city cannot allow the company to come in and get the work done. Not because of funding, but because the fire department still has possession of it.

According to Toppel, the fire department still has not released the property to the city, and has not completed an investigation into one of the fires at the home.

Despite tracking down several people at the South Bend Fire Department on Monday, ABC 57 was unable to reach anyone who could definitively answer our questions regarding the investigation Toppel was referring to.

If it has been concluded, why has the property not been transferred to the city?

In any case, Ramirez voiced concerns, on behalf of the neighborhood, about the length of time it has taken the city to get rid of the problem area.

However, even if the fire department’s investigation is complete and they turn the property over to the City immediately, Toppel indicated, it would still take a few days for the company to contact utility providers to make sure all of their lines have been removed from the home.

Meanwhile, people living on Carroll Street near the home are concerned about the prospect that a family with a small child has to seek shelter in the destroyed home.

Monday night, one neighbor called police after they claimed to have heard voices coming from inside the home.

Two officers walked around the home, shined their flashlights through the open first floor window, and left after they felt satisfied no one was inside at the time.

The officers stayed in the area for a few minutes before moving on to other calls.