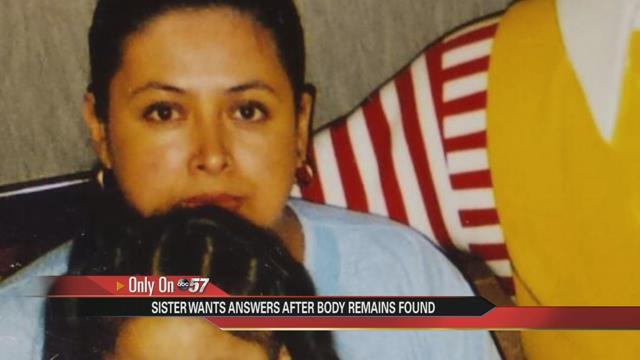 After the remains of a missing Elkhart mother were found her older sister is speaking out to the public for the first time.

In August of 2014 Anastacia Cortes-Reyes vanished.

Family and friends searched for her and pleaded for help.

On May 5th, 2016 remains were found in Bristol and to her family’s horror they were positively identified as Anastacia Cortes-Reyes,

“The older one hugged me and cried saying we are all alone again. And the tear just flowed,” says Zenaida Calleros, who is Anastacia Cortes-Reyes’ Sister.

Calleros lives in California but is in Elkhart visiting her nieces after receiving confirmation that their mother is gone forever.

“For my sister I don’t want it to end like they had just killed a dog, because what they did to her was a cruelty,” says Calleros.

Calleros did a majority of the interview in Spanish the language she says she is more comfortable speaking. But she provided some answers in English wanted to state her main message loud and clear

“I want help to find the person who did it, I want justice,” says Calleros in English.

That justice may take some time.

On Thursday Elkhart Police Public Information Officer, Sergeant Chris Snyder told me there is nothing new to report and the medical examiner in Kalamazoo continues to examine Anastacia’s remains.

This leave little answers for Calleros who has her own suspicions on who could have killed her sister a woman she describes as a quiet home body whose life revolved around her two daughters.

“It could be someone who is very close to her someone who wanted to make her disappear. Because her life was going well she has a lot of dreams teach herself how to drive,” says Calleros.

Calleros adds that this news is affecting her entire family.

There are 11 siblings Anastacia was the youngest.