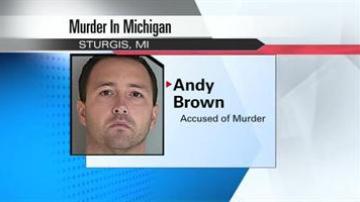 STURGIS, Mich.-- David Locey was shot and killed in his CPA office on October 2nd. On Thursday, Andy Brown was charged with premeditated murder.

Brown was originally accused of embezzling over $100,000 from David Locey, but the embezzlement charges have been dismissed.

The murder has shocked residents of Sturgis because both the Locey and Brown families are well known in the community.

Darlene Boughton said, “What I’ve sensed is a lot of people feeling sadness for both families. Both families were very community oriented people.”

Boughton said she would get her Christmas trees from David Locey’s Timberly Tree Farm.

His thoughtfulness is something she will always remember.

Boughton said, “He gave me a discount on my tree years ago because I was a single mom. He gave me a price much lower, and I was very grateful.”

"He worked on my car several years ago and he’s a great mechanic here in town and they’re a well liked family—the Browns are.”

We reached out to both families, but neither family wanted to comment at this time.

The lead detective for the case is asking the community for information regarding the homicide.

On October 29th Andy Brown will be back in the St Joseph County district court for a preliminary exam conference.

If there is sufficient evidence then a pre-trial is set for October 31st at 845 a.m.