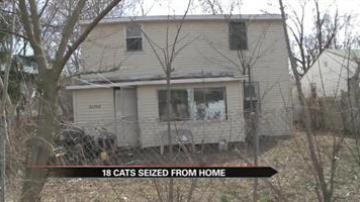 SOUTH BEND, Ind. -- Charges have been filed against a South Bend resident for six counts of cruelty to an animal for allegedly failing to properly care for over 30 cats in his former residence.

On April 7, 2014, St. Joseph County Police officers responded to a home on Ida Street to conduct a welfare check on the male occupant.

Neighbors said he hadn't been seen for a while and they heard noises coming from the home.

According to the probable cause affidavit, no one answered the door and officers could see poor conditions inside the home, including trash and feces.

The officers saw at least one dog and eleven cats through the windows.

Once the officers gained entry to the home, the officers noted the floor was covered with "a sludge of waste and feces" and there was a strong odor that burned the eyes and throat of police officers and Humane Society officers who entered the home.

Humane Society officers rescued nine cats and one dog the first day, but were unable to secure all of the animals because of the poor conditions in the home.

After several trips, Humane Society officers rescued a total of 37 cats and a dog. Three deceased cats were also removed from the home.

Police interviewed the resident, 76-year-old James Robison Sr. He told police he has lived in the home for 40 years, but he has been living elsewhere since November 2013.

Robison said he had been feeding the animals in his Ida Street home every day since moving out.

He said he had been trying to care for the animals but it has become too much for him, reports said.

He also admitted he knew there were deceased cats in the home and said he placed them in carriers to keep them away from the other cats.

A veterinarian advised the animals appeared to have been regularly fed and were not significantly underweight, but almost half of the animals had respiratory infections.

As a result of the investigation, Robison has been charged with six counts of cruelty to an animal, all misdemeanors.