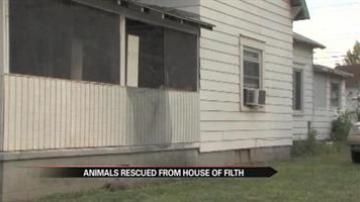 Muncie animal control officials say one woman should never be allowed to get her pets back after they found dozens of animals and her daughter living in a house of filth.

Animal control officials first thought they arrived on the scene of a typical hoarding situation but then they heard animals barking and found five dogs outside with no food or water. Inside, the situation was much worse.

"When we went into the house, there were cats everywhere, the floor was filled with fecal matter, the walls were covered in urine," said Phil Peckinpaugh of Muncie Animal Care.

The woman's 12-year-old daughter was removed from the home by child protective services while the county took the 16 cats and 5 dogs.