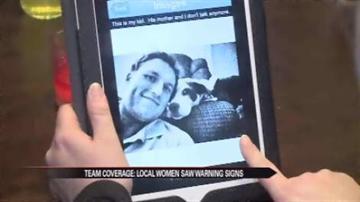 ELKHART, Ind. -- The 'Internet Casanova' scams reached across several states including Indiana. An Elkhart woman says she too got caught up in Raymond Holycross' web of lies until she noticed the warning signs.

Although this master con artist did not get away with the woman's belongings, he did violate her trust. For that, she feels just as duped as anyone else.

Like so many others, Michelle met Ray Holycross on an online dating site called Plenty of Fish and immediately he charmed her.

The two talked for several months by email and text before meeting. For a short time they were always together, but then she started to see some red flags.

"I was paying for everything, like when we ordered Chinese or when we went ice skating."

Michelle says she confronted the man she knew as Rob Thompson and soon she got a gut feeling that something was not right, so she cut ties with him.

"I would just ignore him, avoid him and respond with only one word texts."

Then, came a shocking turn a events.

She was contacted by another victim through her dating profile. In the message it warned of his elaborate lies and how he made off with dozens of women’s money and belongings after stealing their hearts.

"Shock, no way, I looked on the website and it was really him," said Michelle. "I am still speechless."

Now she is just thankful she listened to her instincts. She says her heart goes out to all those fooled by Holycross and with that she has one piece of advice for other women.

"Google them or do whatever. Look them up. I know now that if there is nothing you find about them, then something is wrong."

Michelle says Holycross was a great storyteller. At first she believed him and she wanted to believe him, even when the stories seemed over the top.

Later, those stories became so far fetched that they stopped adding up.

Michelle says she knows there are no laws against lying and that is why she hopes this will teach others to protect themselves from these types of predators.