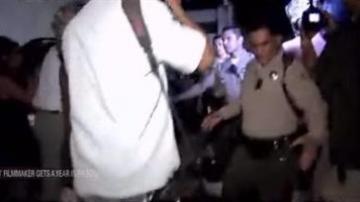 The man accused of making an anti-Islam film that fueled violence in the Middle East will spend a year behind bars, but it's not for the movie.

The sentencing stems from a 2010 violation probation in a bank fraud case. Mark Youssef got international attention following protests against his film.

The movie, "Innocence of Muslims," portrays the prophet Mohammed as ruthless killer and child molester.