Antibody tests for COVID-19 could be available within 'a week or so,' Fauci says 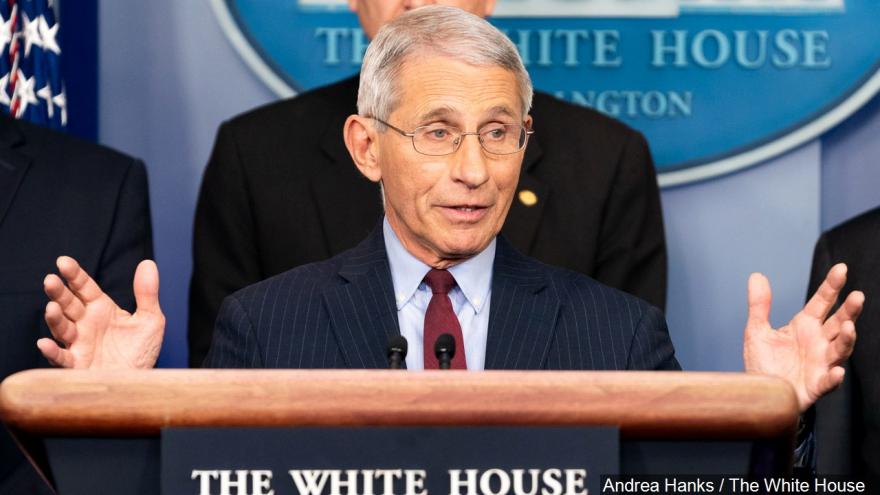 Dr. Anthony S. Fauci, Director of the National Institute of Allergy and Infectious Diseases and member of the White House Coronavirus Task Force, addresses a briefing on the latest information about the Coronavirus., Photo Date: 1/31/2020
By Dakin Andone and Faith Karimi, CNN

(CNN) -- Antibody tests that would verify whether a person recently had the novel coronavirus could be available within a week, according to the nation's top infectious disease expert.

"Within a period of a week or so, we're going to have a rather large number of tests that are available," Dr. Anthony Fauci, director of the National Institute of Allergy and Infectious Diseases, said on CNN's "New Day" Friday morning.

Having antibodies to the coronavirus could mean someone is protected from getting re-infected, making such tests important for medical workers and others on the front lines fighting the pandemic.

"If their antibody test is positive, one can formulate strategies about whether or not they would be at risk or vulnerable to getting re-infected," Fauci explained.

Tests that would identify a current infection would still be important, he said, and used in parallel with antibody tests, which still need to be validated.

"But as we look forward, as we get to the point of at least considering opening up the country as it were, it's very important to appreciate and to understand how much that virus has penetrated this society," Fauci said. "Because it's very likely that there are a large number of people out there that have been infected, have been asymptomatic and did not know they were infected."

At least 16,686 people have died of coronavirus in the United States -- nearly half of them in New York.Of the 466,299 total confirmed cases nationwide, about 162,000 are in New York, data from Johns Hopkins University shows.

The US is set to reach its highest daily number of deaths on or around Sunday, according to models by the prominent Institute for Health Metrics and Evaluation at the University of Washington in Seattle.

It estimated that 60,415 in the US would die of coronavirus by August, assuming social distancing policies continue through May. That projection is down from the 82,000 it predicted earlier this week.

As officials begin discussing what it would take for the US to reopen, there could be "merit" to the idea of Americans carrying certificates of immunity that prove they have tested positive for coronavirus antibodies, Fauci said.

Fauci told CNN, "It's one of those things that we talk about when we want to make sure that we know who the vulnerable people are and not."

While states prepare for the peak period, experts say it appears social distancing is working.

"Because it is working," he said. "The kinds of mitigations that we're doing now, the curves that we're seeing flattening and coming down, that's exactly and precisely because of what the American public is doing."

"So even though we're in a holiday season, now is no time to back off," Fauci added. "As I say so often, now is the time to actually put your foot on the accelerator. Because we're going in the right direction."

Some states remain cautiously optimistic with the latest developments.

In New York, Gov. Andrew Cuomo said Thursday that the number of people hospitalized in the state is going down but deaths have gone up. He described the deaths as a lagging indicator, saying those who don't make it tend to have been hospitalized the longest.

In Connecticut, Gov. Ned Lamont said new hospitalizations are dropping while Arkansas Gov. Asa Hutchinson announced that the state has the lowest number of hospitalizations per 100,000 people compared to other neighboring states.

In Ohio, while the number of coronavirus-related deaths continues to increase, the number of people impacted by the virus is lower than previously projected, Gov. Mike DeWine said.

California Gov. Gavin Newsom said the state has seen a 1.9% drop of people in ICU, and the stay-at-home order appears to be working.

"I think we're seeing the consequences of that when we see that our mortality rate is really a lot lower than what have been predicted, and it really shows that this mitigation works," said Dr. Robert Redfield, director of the US Centers for Disease Control and Prevention. "I think we're coming to the peak, as we sit here today, where we're able to see the other side of the curve, and we'll see this outbreak continue to decline over the weeks ahead."

While maintaining social distancing measures appears to be holding down the spread in some areas, reopening the country will require a strategy and understanding the extent of the transmission, experts say.

"It's not going to be one size fits all. It's going to be using the data that we have from surveillance to really understand where it is the most important places for us to begin to reopen," Redfield said.

Dr. Fauci on Friday cautioned against reopening too early, saying there should be a clear indication that the country is "strongly going in the right direction."

As coronavirus ravages the world, states are rushing to get hydroxychloroquine, an antimalarial drug that President Donald Trump has touted as potential treatment and a "game changer."

The drug has not been fully tested but some states are gathering doses for their patients. The CDC's Redfield said he does not recommend the drug.

The CDC removed its website guidelines for doctors on how to prescribe hydroxychloroquine and chloroquine. Trump has pressed federal health officials to make the drugs more widely available despite little reliable evidence that they are effective at treating the virus.

"We're very comfortable in responding when we have data that is compelling," Redfield said Thursday on CNN's Global Town Hall. "CDC, as an organization ... we're not an opinion organization. We're a science-based data driven organization. So I do think this is going to be an independent decision of these health care providers and patients."

Despite the lack of a vaccine, the CDC is preparing for what could happen next year, which is expected to be challenging as well, Redfield said, adding that proactive steps will change the way the country deals with another outbreak.

"That includes early case identification, isolating people who are sick and tracing those that the person has come into contact with while they were contagious," he said. "We don't have to go through the serious mitigation steps that we're taking to get us under control."

The economy takes a major hit

Social distancing is helping keep coronavirus deaths down, but it's also having a major effect on the economy.

Economic growth likely fell at a rate of 2.4% in the first quarter, and will decline a staggering 26.5% in the second quarter, the survey from the National Association for Business Economics found.

Despite the abrupt downturn, the economists are optimistic the economy will bounce back in the latter half of 2020, growing at a rate of nearly 6% by the end of the year.