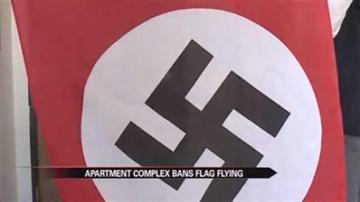 ELKHART, Ind -- The Walnut Trails apartment complex in Elkhart has banned all of its tenants from flying flags or banners. One tenant says his rights are being violated because he doesn’t have the freedom to fly a flag.

The tenant is Dale Duncan, a 59 year old military veteran. He was flying the National Socialist Flag, similar to a Nazi flag, but the management at the complex told him to take down the flag.
Duncan said he would take his flag down, but only if other residents also took their flags down.

Management agreed. They said there's already a clause in their lease agreement that all of their tenants have signed stating that they will not hang anything outside, including flags or banners.

Duncan is part of one of the largest neo-Nazi groups in the United States, the National Socialist Party based in Detroit.

He says the flag he was displaying was the National Socialist flag.

"They violated my First Amendment rights why not I violate theirs,” said Duncan. "As far as I am concerned that's the greatest flag that ever flown. I'm glad that Hitler brought it up."

Duncan took his flag down. Management at the complex just renewed his lease.