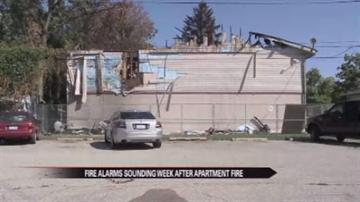 BUCHANAN, Mich. -- It has been a little over a week since 35 people were evacuated from the Parkside Terrace Apartments because of a fire. We wanted to know how the recovery was going and learned the residents left behind are dealing with an annoying problem.

Vinette Dephillipe says she's about to lose it. A fire alarm has been going off non-stop for the last three days.

"I have no clue how long the battery is going to last in this thing," said Dephillipe.

Last week, 35 of her neighbors had to move out of their apartments because of a fire.

She wants it shut off.

"I think the fire department could do something. They have all these HAZMAT suits, and everything else, they can go in and pull the silly battery," said Dephillipe.

"I'd like to see it stop beeping, it is rather irritating," said Brent Batchlor.

It seems like a simple fix. Go in the apartment and take out the battery.

We asked management why this hasn't been done. They wouldn't speak on camera but said their insurance company is still investigating and until that is done, no one can safely enter.

Many of the fire victims didn't have insurance and still need help.

If you would like to donate, you can do so at the Red Cross or contact management directly.

The insurance company's investigation could last a few more weeks.