Appellate court revises sentences of 3 of the Elkhart Four 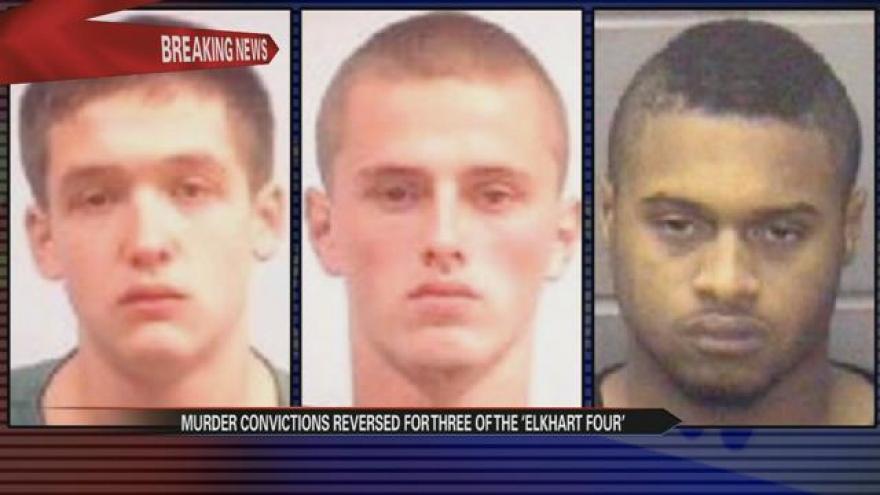 INDIANAPOLIS, Ind. -- The Indiana Court of Appeals revised the sentences of three of the Elkhart Four who were convicted of felony murder in the death of a co-conspirator.

They thought the house was empty, but the homeowner, Rodney Scott, was asleep upstairs.

Four of the suspects entered the home and Sparks waited outside to act as a look out.

After the four entered the home, Scott woke up, got his gun and went downstairs.

He trapped two of the burglars in a bedroom and fired shots close to the ground to frighten them.

The two burglars, Quiroz and Johnson, got into the closet and Scott called 911.

A third man, who Scott had not seen before, came out of the closet and asked if he could lie on the bed. Scott said no. The third person was identified as Layman.

When police arrived, they found Johnson dead, Layman with a gunshot wound to the leg and apprehended Quiroz.

All four were charged with felony murder in Johnson's death.

Quiroz pleaded guilty and was sentenced to 55 years in prison with ten suspended to probation.

Sharp, Layman and Sparks were tried together and were all convicted.

Sparks, Layman and Sharp appealed their convictions and sentences.

While the court upheld the use of the felony murder statute, the court did decide the sentences were inappropriate.

The Indiana Constitution allows the appellate court the right to modify sentences if the trial court's decision was not appropriate considering the nature of the offense and the character of the defendant.

The opinion states the crime was not especially heinous and this was the first time Layman, Sparks and Sharp were facing charges in adult court.

Their co-conspirator Jose Quiroz pleaded guilty and was sentenced to 55 years and suspended ten years to probation.

The judges ordered changes to the sentences of Sharp, Layman and Sparks.

Layman and Sharp's sentences were adjusted to include 10 years suspended to probation.

Sparks' sentence was adjusted to 5 years suspended to probation.

All four are now have 45 year sentences.

In the Layman and Sparks decision, one judge dissented.

Judge Kirsch argued Layman and Sparks were unarmed and attempted to burglarize what they thought was an unoccupied home. The judge disagreed that the felony murder statute was properly applied in the case.

Judge May, in the Layman and Sparks decisions, concurred with the decision but stated that there should be an examination of the use of felony murder when the defendants did not actually kill the person. The judge suggests the legislature did not intend the statute to be used to convict co-defendants.

Judge May also stated since the defendants were juveniles, it was not appropriate to use the "foreseeability" standard. It states a person should reasonably foresee that someone could have been killed while committed the underlying felony. Judge May says juveniles may not be able to foresee the way adults do.