April showers not enough to reach normal for April 2015 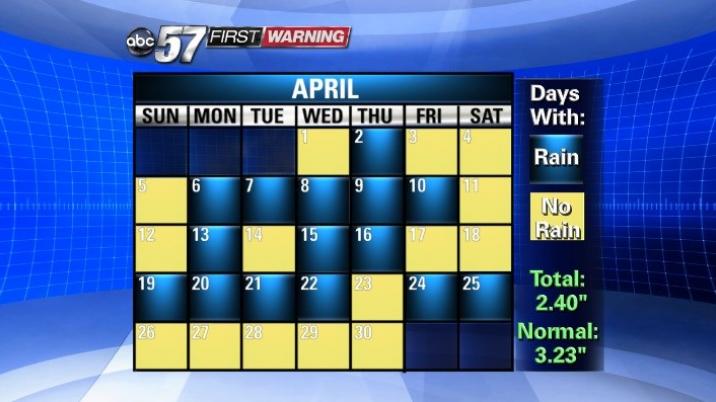 Now let's look back at the high temperatures for the month compared to normal.  April saw a total of eighteen days above average and many of those days are thanks to the mid-month warm-up that included 70s and even the first 80° day of the year on April 18th (Fig. 2).  However, we did end on a cooler trend with the last ten days of the month struggling to reach 60°.  Overall, when looking at the high and low temperatures, the average monthly temperature was 50.1°, which is 1.6° warmer than the normal for April.

Now looking towards May, what can the Michiana area expect?  According to the Climate Prediction Center, the northern half of Michiana is expected to see temperatures at or slightly above average for the month, which is definitely a trend that we can look forward to after the cooler end to April.  Meanwhile, precipitation will be slightly below normal for the month of May as well, following the same trend as April (Fig. 3).

We continue to track a warm start to May with 70° temperatures moving in by the weekend.  Be sure to stay tuned to ABC57 on the air and online with our daily forecasts for the latest updates.