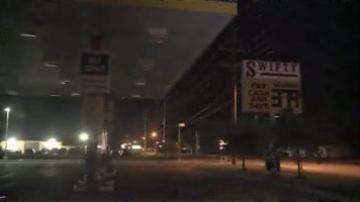 MISHAWAKA, Ind. -- A man who police said broke into a Swifty Gas Station in Mishawaka is on the run.

It happened around 10:45 p.m. Tuesday on McKinley Avenue, just moments before the gas station closed.

Police said a man armed with a gun robbed the store and took off. When police arrived they set up a perimeter outside, searched the area and brought in a K-9 unit to help.

After searching for over an hour they weren't able to find anyone and cleared the scene. The gas station supervisor as well as one of the employees would not comment on the robbery.

No injuries were reported and no word if the suspects got away with any stolen items.