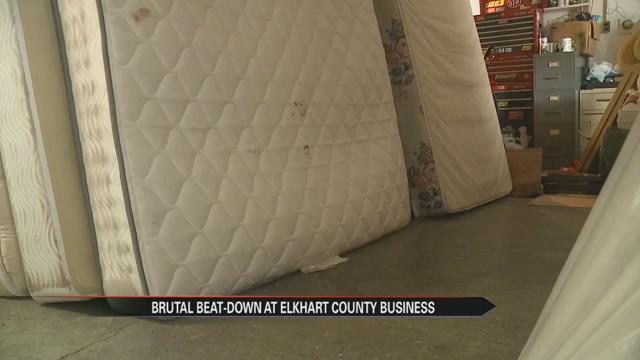 Two suspects beat up an employee of a furniture store on CR7 in Elkhart County.

Dalton Campbell owns New to You furniture store. He says on Tuesday around 3 p.m. he rushed to the store to care for his uncle who had been beaten.

“When I came in the cash register was open there was no money in it then I walked back here – I still hadn't found him yet and seen there was a crow bar laying on this bed right here,” says Dalton.

About $20 from the cash register, a laptop, and his uncle's cashless wallet were stolen.

Dalton said the thieves could have just asked for the items instead of causing such a bloody scene.

“They asked if they could buy something that we had in the back room so I went back to show them,” says Michael Campbell, the victim.

Michael says the store has never attracted criminal activity so he was unsuspecting of the two men shopping around.

“And when I got to the opening of the back room I got hit from behind,” says Michael.

A struggle continued in the back area of the store between some mattresses.

“And then I got into some type of a choke hold. They had me around the neck and at that point the lights did go out,” said Michael.

Michael was left unconscious and woke up to his nephew pulling mattresses smeared with his blood off of him.

“There was quite a bit of blood on me on my hands my forehead of course my nose was still bleeding,” says Michael.

Now, Dalton says he will have to change some things in order to protect his business and his family.

“You don't expect it to happen I guess until it does – and I was three minutes away – and I just and just taking more precautions now,” says Dalton.

Police say this case is still being investigated. The Campbells say the suspects were two black males who looked to be in about their 30's and drove a white car.

If you have any information to help catch the med who attacked the family business you can contact the Elkhart County Sheriff's Department.