Arrest made in Dunes Inn robbery 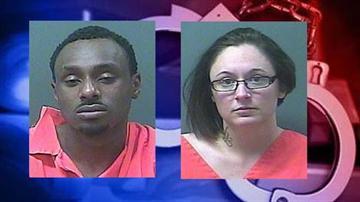 LAPORTE COUNTY, Ind. -- Two people have been arrested in connection with the robbery of the Dunes Inn on February 23.

On Monday, the LaPorte County Sheriff's Office released photos of the two suspects.

The sheriff's office and the Michigan City Police Department began getting tips right away about potential suspects.

Those tips led to the arrest of 31-year-old Angela Sheeler and 25-year-old Demarcus Sharp.

According to the sheriff's office, on Sunday at approximately 11:30 CST, they were called to the Dunes Inn on North Frontage Road concerning a robbery.

Investigators learned a woman entered the lobby and asked about renting a room. She left, but returned a few minutes later and gave the clerk a note demanding money.

The clerk gave the woman cash and she was seen leaving in a tan or light colored Honda driven by someone else.