Arrest made in landmark vandalism 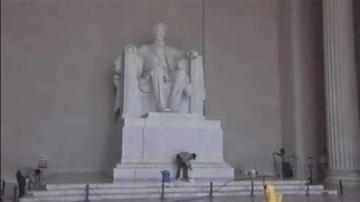 A wave of vandalism involving some of the nation's biggest landmarks may be coming to an end.

The string of crimes started Friday at the Lincoln Memorial where green paint was found along the statue's base, lap, and leg of the president.

Sunday, tourists reported green paint on a statue at the Smithsonian, and Monday paint was found on an Organ at the National Cathedral.

Police believe the same homeless woman is responsible for all three cases.

Police say a 58-year-old woman was arrested inside the National Cathedral not long after the paint was found.

She is charged with defacing property but police are still trying to figure out a motive for the crime.