Arrest made in morning house fire 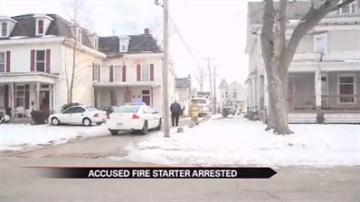 GOSHEN, Ind. – Trever Bouck, a 24-year-old Elkhart County man was arrested for arson for allegedly setting fire to a house in Goshen on South 7th Street.

Goshen fire and police were dispatched to 114 S. 7th Street for a house fire at approximately 8:30 a.m. Tuesday. The house is converted into four separate apartments and the fire department evacuated all for of the units as a safety precaution.

"My daughter who was in the house she said, 'Mom they just brought someone down off the ladder!" said neighbor Jennifer Leatherman.

Jennifer Leatherman took her home schooled children outside for a real life lesson that was unfolding across the street at an apartment house.

"First engine company arrived and found a female up on the second floor balcony. They picked the female off the balcony with a ladder,” said Goshen Fire Chief Dan Sink. "The second engine crew took the fire hose to the second floor and put out a kitchen fire."

Chief Sink says the fire was blocking the only way in or out. The 23-year-old resident, Lindsay Baker,  was forced to climb out onto the roof and wait for help.

"By the time I got outside here they already had her in the ambulance,” said Leatherman.

Police believe the woman's live in boyfriend and father of her 8-month old baby intentionally set the fire and left the apartment with their daughter.

"Later the dad walked up with the baby,” said Leatherman who was puzzeled with what was going on.

Baker said off camera that she awoke to the sound of her alarm clock going off. She said the smoke was so thick she had to crawl to her baby’s crib and that’s when she discovered the baby wasn’t there. She told ABC 57 News that she crawled back to her bedroom and pulled a blanket off the bed and wrapped it around her body and climbed onto the roof waiting for help to arrive.

Baker was taken to IU Health Goshen and was treated for minor smoke inhalation and released.

Trever Bouck, was arrested on one count of arson, a class A felony.