Arrest made in shooting death of Michigan City 3-year-old 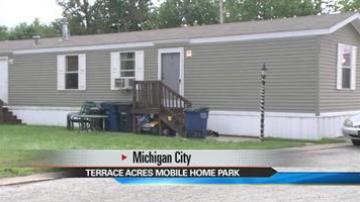 MICHIGAN CITY, Ind. --- A man was arrested and charged related to the shooting death of three year old Lance Wilson on Sunday.

According to police, on Sunday afternoon they responded to a residence in the Terrace Acres Mobile Home Park Sunday afternoon after receiving reports of a three year old child who had died as a result of a gunshot wound.

The child was identified as Lance Wilson.

A probable cause hearing was held Monday and Judge Steven King found probable cause to charge 24-year-old Zachariah L. Grisham with neglect of a dependent and reckless homicide.

Grisham is being held in the LaPorte County jail in lieu of $100,000 bond.

The investigation is ongoing but police revealed Grisham is living with and dating the victim's mother.

Neighbors say they realized something was wrong when Lance's mother April ran out of the house visibly upset, with her little boy in her arms.

"I walked outside and heard it first thing and instantly starting crying. I didn't know them but I live a few houses down. So it was just sad. The first thing I think of is my child being in that situation," said Kayla Rosko.

Other residents of the mobile home community say the lease agreement says no guns are allowed in the community.