Artist finds deeper meaning in theft of artwork, will include story in exhibit 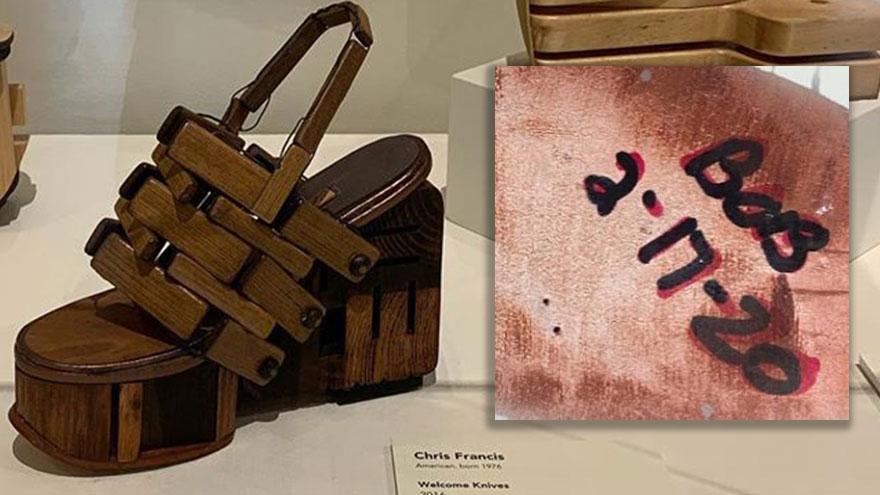 A piece of art on display at the South Bend Museum of Art was reported stolen on Saturday. After news coverage of the theft, the wooden shoe was returned to the museum, along with a permanent addition to its story.

The museum posted a photo of the artwork "Welcome Knives" on Sunday asking for assistance in getting the shoe returned.

On Monday, a woman took the artwork to the police department after she learned it had been stolen from the museum. She told police she had received it as a gift and they found her explanation credible.

The museum shared a note from the artist, Chris Francis, who sees the reason behind the shoe's disappearance as an act done with kind intent.

Francis said Bob put his name on the shoe and his name will remain - and will become part of the story of the piece.

The art museum is not pursuing charges against the man who took the shoe.

Francis' statement as shared by the South Bend Art Museum on Facebook:

A homeless man seeking warmth from the cold visited the museum and gifted the shoe to one of his family members as a thank you present.

Turns out this man had once been a woodworker which may have drawn him to the shoe?

When his family member seen the shoe on the news the shoe was given to the police.

In my mind BOB didn’t take the shoe he instead gave the shoe meaning. It’s more special with BOB’s name written on it than it ever was before.

I might understand BOB in ways others can’t because I spent time in my own life sleeping outside in the cold, dodging the elements in movie theatre’s and in museums.

Like BOB I also was a woodworker that wanted to give special gifts to others.

He and I may have more in common than most that have ever attended one of my exhibitions.

This act was done with kind intent. It’s a special and unusual circumstance and when all the facts came together it proved to be a very touching story, one that I’ll always remember.

BOB’s name will remain on the piece, it’s part of the story of the shoe.

The museum will figure out a way to display it with the name visible.

Not everything taken is stolen, some things just end up on display in unplanned exhibitions.