As Florida sheriff comes under scrutiny, proposal to ban some weapons fails 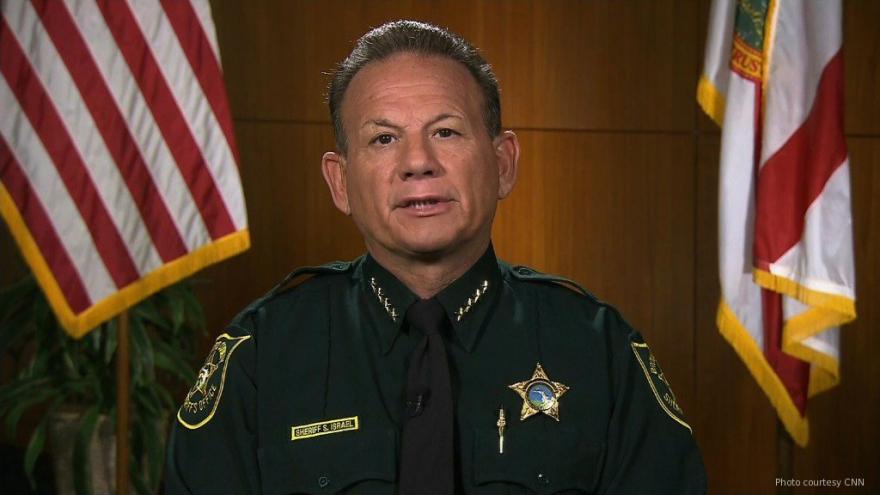 (CNN) -- An amendment to a Florida bill that would have banned weapons like the one used in the Parkland school shooting failed Monday amid growing cries for accountability and reform.

Hundreds of Floridians converged on the state Capitol in Tallahassee on Monday as lawmakers took up a series of proposals in response to the deadly shooting.

One bill included an amendment that would ban assault-style rifles like the one used by the Marjory Stoneman Douglas High School shooter. Senate Bill 7022, which lets law enforcement seize firearms from people under certain conditions, advanced without the amendment.

US President Donald Trump is set to meet with lawmakers on Wednesday, the White House said.

And, with classes scheduled to resume this week, the rally came on the heels of growing criticism about law enforcement's response to the shooting.

It was the second time since the shooting that protesters visited the Capitol to pressure lawmakers into action.

Where students last week sought conversations and lobbied for a variety of demands, Rally in Tally participants listed as one of its aims a permanent ban on assault-style rifles.

Carly Schwamm, a high school student from Boca Raton, said the time had come for a ban on semi-automatic weapons.

"This tragedy hit so close to home," Schwamm said. "It's about time that we make actual change."

"My generation is saying will I survive another day? Will I be shot in a movie theater or a concert?" said Houston Barenholtz, 18. "We're supposed to be protecting these places and now we're getting shot at."

SB 7022 as passed is "not perfect," Parkland Mayor Christine Hunschofsky said, but it's better than nothing.

"To not do anything because it is not the perfect bill is not the right thing," Hunschofsky said. "We appreciate the action and hope it is a first step so this never happens again."

In addition to SB 7022, two more proposals advanced. SB 7026, which relates to active shooter policies, includes the creation of a voluntary program that provides "firearm safety and proficiency training for selected faculty and staff strategically focused on providing security" in attacks. SB 7024 creates an exemption to public record laws for a victim's address in mass violence on school grounds.

Lawmakers called for a state investigation of the Broward County Sheriff's Office response to the shooting.

In a letter sent Sunday, House Speaker Richard Corcoran, along with 73 other Republican state representatives, called on the governor to suspend Broward Sheriff Scott Israel for "incompetence and neglect of duty."

Israel said his department "will fully cooperate" with the probe, "as we believe in full transparency and accountability."

The letter said Israel and his deputies had information about the shooter "in the years, months and days leading up to that shooting," yet failed to intervene.

"Sheriff Israel failed to maintain a culture of alertness, vigilance and thoroughness amongst his deputies," the letter said. "As a result of Sheriff Israel's failures, students and teachers died."

Law enforcement, including the FBI and local authorities, received warnings about the gunman before the attack. One caller said the eventual gunman could be a "school shooter in the making."

Israel, a Democrat, said he won't resign. He pledged cooperation from his department, "as we believe in full transparency and accountability."

What happened during the shooting?

Meanwhile, Israel has called out the school resource officer assigned to Stoneman Douglas that day, prompting the former deputy to defend his actions.

Israel said Scot Peterson took cover outside the building as bullets flew for four minutes and "never went in." Peterson resigned last week after his suspension.

"I was disgusted. I was just demoralized with the performance of former deputy Peterson," Israel said.

In a letter responding to a request to remove the sheriff from his post, Israel said that Peterson received active-shooter training.

Peterson's attorney accused Israel of maligning Peterson, who was named school resource office of the year in 2014.

"Allegations that Mr. Peterson was a coward and that his performance, under the circumstances, failed to meet the standards of police officers are patently untrue," the statement said. "Mr. Peterson is confident that his actions on that day were appropriate under the circumstances and that the video (together with the eyewitness testimony of those on the scene) will exonerate him of any subpar performance."

Peterson first received a call of firecrackers, not a gun, the lawyer said. He initially thought the shooter was outside, a conclusion that he felt was confirmed when he heard radio transmission indicating there was a gunshot victim near the football field.

DiRuzzo pointed out that Israel has said it's important to let the investigation into his department play out. "We question why this statement would not also apply to Mr. Peterson."

As the investigations continue, Stoneman Douglas is preparing to reopen for classes on Wednesday. School officials are working with students who don't want to return to Stoneman Douglas, arranging for them to transfer.

The freshman building where the shooting occurred will remain closed. Armed deputies will be on hand when students return to class Wednesday, along with counselors and service dogs in classrooms, Superintendent Robert Runcie said.

The week kicked off with a voluntary campus orientation on Sunday. Still processing their emotions, students and parents wore T-shirts that read "MSDStrong" for their first return to campus.

Sophomore Tanzil Philip said it frightened him to see the windows covered in the closed building.

"I didn't know how I was going to feel when I went in and I saw the fence around the freshman building," Philip said. "We just gave each other hugs."

"It was a very, very, very down and very upsetting day in a way. Teachers are very stressed about being able to do the right thing for their students," he said.

While there's no playbook for welcoming students back into the classroom, Pittman said there are definitely some guiding principles.

"I think the best thing that all of us as teachers can do is be ourselves, to let our students know we're there for them, that we love and care for them."