Ash and Cleveland intersection is getting an upgrade 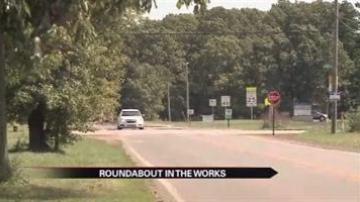 ST. JOSEPH COUNTY, Ind. --- The intersection of Cleveland Road and Ash Road needed some major changes so St. Joseph County and Elkhart County are joining forces to ease up congestion.

Right now, the intersection is a four-way stop and at the peak of traffic hours, cars will back up for a mile down County Road 6 and Cleveland Road.

“The traffic hour is horrendous,” said JoAnn Wolfe, a nearby resident.

Wolfe sees the traffic back up past her driveway, everyday.

“[My driveway] is oh, 700-800 feet away from the intersection and[traffic] is just backed up, moving forward a little bit at a time.”

It’s a congestion nightmare that was on St. Joseph County’s radar for quite awhile and now the plans are in place to make a change.

St. Joseph County is working together with Elkhart County to construct a roundabout at the intersection.

“I was very happy about it,” said Wolfe. “A lot of people don’t seem to like roundabouts, but I love them.”

According to the Elkhart County engineer, the roundabout was a more suitable solution to the congestion problem than a stop light for several reasons.

First, the roundabout will allow traffic to flow freely during the off hours but still regulate traffic during the peak hours.

A roundabout is also a better financial decision.

Although it may be more expensive initially, in the long run, a stop light requires more maintenance, costing more over time.

Plus, the counties are able to use $2 million of federal funding for the  construction of the roundabout where as the counties would be required to front the entire cost of a stop light.

The engineers are still in the planning stages. The construction bids are expected to begin in the Spring 2013 with the ground breaking in the Summer or fall of 2013.