Ash trees cut down in attempt to eradicate beetle 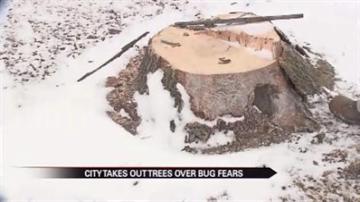 ELKHART, Ind. -- Sixty to seventy trees once stood along the river in McNaughton Park, but now it’s an open field of tree stumps. The city had to cut down hundreds of trees at the park, along the road and even some in yards – all because of the Emerald Ash Borer.

The Emerald Ash Borer is a small green beetle with a very destructive appetite.

Crews plan to cut down hundreds of local ash trees by March.

The killer is the most destructive non-native insect in the United States.

"The Emerald Ash Borer works on all ashes, and thankfully no other trees. But it works fast," said Dan Coy, Elkhart City Forrester.

Coy says the pest is eating up his man hours.

"It's pretty much the pain in my behind,” said Coy.

It's easier to remove the infected trees when the ground is frozen so his team of six men must work fast.

They've marked the ones they hope to save with green dots.

But the vast majority can't be saved because the insect eats away at the tissue between the bark and the hardwood.

"If it's done so much damage to that layer, even if we treat it and kill the borer, the tree can't repair that damage,” said Coy.

The damage isn't just felt by the trees. Elkhart residents will also suffer from a decrease in air quality and storm water interception.

"We've lost so much tree canopy that would take and capture a bunch of rain water and snow and just keep it out of the storm sewer-that we're going to see increased loads in the future,” said Coy.

Coy also said there are people whose yards are shaded year round by ash trees – and in a few years they won’t be.

This can lead to increased cooling bills.

If an ash tree is on your property get it checked out to determine if it is infected or not.