Astronauts struggle to sleep among the stars 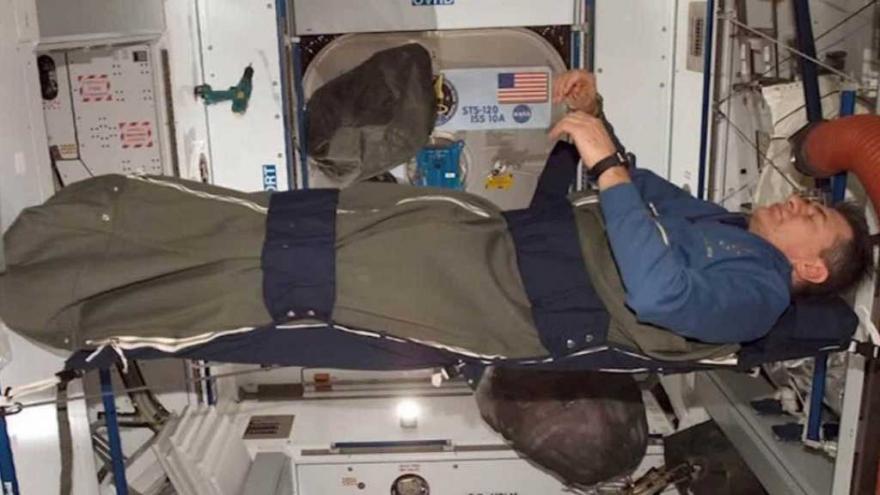 (CNN) -- An odd thing happens to astronauts as they zip around the Earth at roughly 17,500 miles per hour: They don't get enough sleep.

This may be partly because astronauts don't have to wake up early to see daybreak; they get a sunrise and a sunset every 90 minutes.

"It's far too fast for the body clock to adapt to, and so they essentially experience a perpetual jet lag," said Erin Flynn-Evans, director of NASA's Fatigue Countermeasures Laboratory.

Without external cues like sunlight, humans tend to settle into a sleep cycle that is slightly longer than 24 hours: about 24.2 hours on average.

"That extra 12 minutes doesn't seem like a lot, but ... after a couple of weeks, you're going to be falling asleep several hours later than you did the first day," Flynn-Evans said.

It's not just astronauts whose biological clocks fall out of sync; shift workers such as doctors, pilots and police officers may face the resulting fatigue and the impairment that comes with it.

A key difference, Flynn-Evans said, is that there are more safeguards to catch errors on Earth -- such as hospital computers or nursing staff who might catch a wrong prescription.

"When you're in space, the stakes are much higher," she said. "A missed keystroke can be the difference between life and death, really."

Research has shown that astronauts tend to sleep between six and 6½ hours, on average, per night. This is considerably less than the minimum seven hours recommended by the American Academy of Sleep Medicine. But it's difficult to predict how someone will be affected by sleep deprivation, experts say.

"Not everybody is affected to the same degree," said David Dinges, a sleep researcher who teaches at the University of Pennsylvania Perelman School of Medicine. "This is one of the great mysteries we're now confronting."

Dinges co-authored research on a spaceflight simulation experiment known as Mars500, developed by the Russian Academy of Sciences. For most of 2010 and 2011, six men were kept in isolation for 520 days, tending to daily tasks, simulating 20-minute communication delays with Earth and even walking on a fake Mars. Meanwhile, their sleep, food intake and activity were monitored constantly.

The men had vastly different responses to the 17-month experiment. Only two of the crewmembers seemed to cope well and sleep regularly, Dinges said. Among the others, one suffered increasing insomnia, and one became more lethargic and slept more than the others. Yet another became depressed, and the remaining crewmember settled into 25-hour sleep cycle, staying awake when his crewmembers were asleep.

Dinges said the two crewmembers whose sleep remained steady -- even in the absence of conventional daylight -- were those who kept to a strict schedule and found other ways to control their biological clocks.

"The only way to keep your clock entrained to some extent is a regular behavioral routine with daily exercise and eating at the same time," he said. "Why the others couldn't do that, or didn't do it, we're not quite sure."

Out of the blue

Flynn-Evans' sleep lab in NASA's Ames Research Center, nestled between tech giants in Silicon Valley, is trying to use technology to ensure that astronauts -- and people on Earth -- can follow a healthy sleep routine.

Among NASA's gadgets are wristwatches that monitor sleep and light levels, caps that record electric signals in the brain and a robotic arm. The lab also has a driving simulation, which Flynn-Evans hopes will reveal how drivers and pilots will engage with semi-autonomous vehicles that may lead people to "zone out a little bit" when they are tired.

"People aren't very good at determining when they're sleepy," she said.

The agency has also installed blue-enriched LED lights aboard the International Space Station in order to synchronize the crew's circadian rhythms. Though blue light has been shown to trigger alertness in airline pilots and hospital nurses who work odd hours, Flynn-Evans said it can also be an obstacle to getting a good night's sleep -- especially for people who sleep during the day or those who enjoy late-night screen time.

"Although it may seem like a little thing to have your phone plugged in next to your bed ... that can have a tremendous negative impact on your sleep and your circadian rhythm," she said.

Even with great sleep hygiene, Flynn-Evans said, a looming challenge remains: What happens when we finally make it to Mars?

A day on Mars is just over 24.6 hours -- even longer than the 24.2-hour cycle that our biological clocks fall into without external cues.

"We'll have to stay up a little bit later every day," Flynn-Evans said.

There are other obstacles to sleeping in space, Flynn-Evans said, such as the sheer excitement of being on a space mission and the urge to look out at the Earth -- a bright blue light -- right before bed.

"They may just want to look out at the Earth in all its glory," she said. "They may be flying over their hometown."

But it's not all tossing and turning aboard the ISS; some astronauts have found pleasant things about snoozing in space.

Still, the astronaut said she wasn't entirely saddened to leave her space-grade sleeping bag behind.

"It was awesome coming back" to Earth, she said. "I still love the bed."