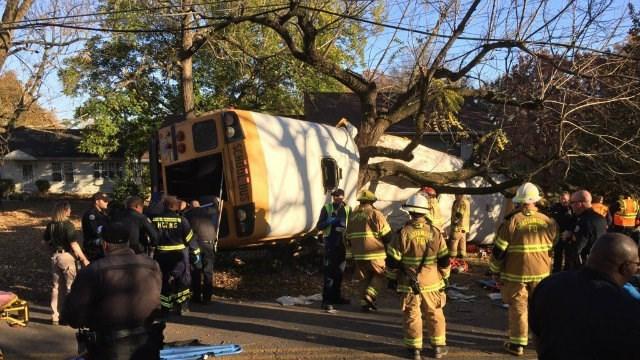 (CNN) -- At least six children were killed in a school bus crash in Chattanooga, Tennessee, on Monday, a spokeswoman for the Hamilton County District Attorney's Office said.

Spokeswoman Melydia Clewell said at least five children died on the scene, and one died at a hospital.

The bus was carrying 35 children ranging in age from kindergarten to fifth grade, according to Assistant Chattanooga Police Chief Tracy Arnold.

The bus appears to have slammed into a tree, which split it apart.

At least 23 people were transported to local hospitals after the single-vehicle crash.

"A bus crash involving schoolchildren is every public safety professional's worst nightmare but it's also the thing that we all train for," Fletcher said, according to CNN-affiliate WTVC.

The bus driver is cooperative and talking to investigators, police said.

A tweet from the Chattanooga Fire Department showed the bus on its side and up against a tree as emergency officials extricated the last patient through the back door.

WTVC reported that lines of donors stretched out the door of the Chattanooga Blood Assurance, the local blood bank, which extended its hours Monday night because of the bus crash.