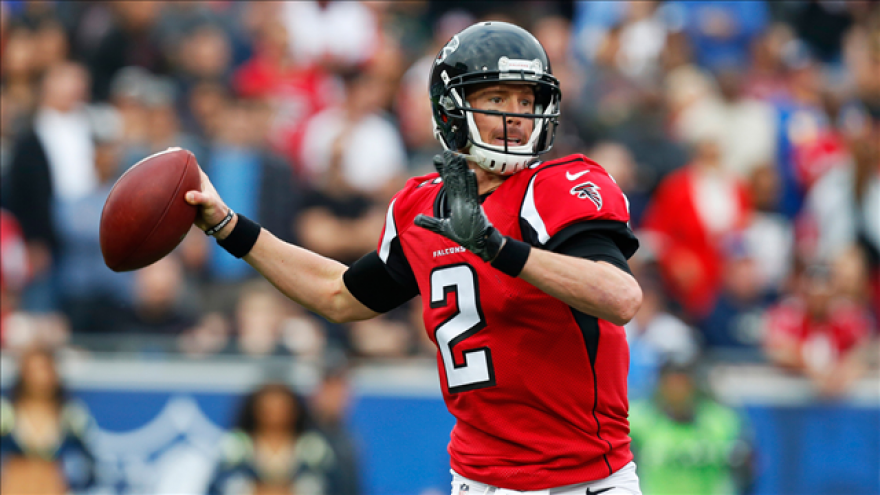 HOUSTON (CNN) -- Matt Ryan drew laughs from the reporters in late January in Flowery Branch, Georgia, as the Atlanta Falcons quarterback gave a scouting report on himself from his senior year at William Penn Charter School in Philadelphia.

"He was not that good," Ryan cracked at the team's facility. "Tall, skinny, slow. We didn't throw the ball all that often. We ran the triple option when I was in high school, so I wasn't that difficult to defend in that system. We could throw it a little bit ... I've kind of been getting better as the years have gone on. I was young, but I've gotten a lot better since then."

He sure has. Now in his ninth NFL season, the 31-year-old nicknamed Matty Ice is in Houston, a game away from winning Atlanta's first Super Bowl title.

"Obviously, this is what you dream about as a kid is playing in a game, playing in this game and winning this game," Ryan said earlier this week.

"That's where your thoughts are when you're in your backyard and you're 10 years old and playing with your brothers. That's where it was for me. As I've gotten further along in my career -- a few more gray hairs or whatever -- I think that you learn what works best for you at handling big situations."

And instead of being the in the shadow as the "other quarterback" in a major city, the spotlight will -- finally -- directly shine on him.

The other guy in Boston

Growing up, Ryan wasn't seen as that can't-miss kid. He was a three-star recruit who went to Boston College, a program not known as a college football powerhouse.

"You've got to understand, Boston is a professional sports town, and I kind of get that," Ryan said. "But we made some waves while I was at BC, and it was a fun time to be there. Were you ever the lead story? Maybe not. But we certainly had a fabric and really good support in that community. Those games, they were crowded, and Alumni Stadium was full."

Brady got most of the headlines, but Ryan's name was all over the Eagles' record books by the time he left school.

He passed for 9,313 yards, third on the Boston College all-time record list behind Doug Flutie and Glenn Foley. In his senior season, he set school records for 400-yard passing performances in both a career and a season. His 31 touchdown passes in 2007 broke the school season record, which was held by Flutie. He even was in the Heisman Trophy conversation, finishing seventh.

It was time to turn pro. The next chapter: Replacing a Falcons superstar.

Michael Vick, Atlanta's quarterback for six seasons who thrilled fans with his arm and his feet, started serving his prison sentence in 2007 for his role in a dogfighting ring.

The team was moving on, and the Falcons selected Ryan as the third overall pick in the 2008 NFL Draft.

"Obviously, when I got drafted here, Mike had been here for such a long time, and everybody knows how that ended in Atlanta," Ryan said. "For me, early on, I just tried to go in and do the job the best I could."

Ryan's NFL career started spectacularly. His first NFL pass was a 62-yard touchdown, and he was named the league's offensive rookie of the year. Atlanta reached the postseason four times in his first five seasons.

But the playoff appearances weren't translating to Super Bowls. Critics labeled him as a choker in big games.

And it got rougher. Last year, Atlanta missed the playoffs for the third consecutive season.

"It's tough when you don't have the kind of success you hoped you'd have going into a season," Ryan said to CNN's Coy Wire. "Whether it be personal or team, you're disappointed. And for me, I felt like there was better out there for us and for myself."

So he did something about it.

During the offseason, Ryan worked with Adam Dedeaux and Tom House at the 3DQB training facility in California to change his throwing approach.

There was also the mental outlook. For Ryan, the biggest thing is not making something out to be more than it is.

The results have shown on the field. He's a favorite to win the NFL MVP award after throwing for 38 touchdowns, second in the NFL, to just seven interceptions. His 4,944 passing yards was second in the league and is the franchise record for most passing yards in a season. His passer rating is at 117.1, a career best.

"The thing that I admire so much about him, and especially this year, he has not backed off," Falcons head coach Dan Quinn said.

"That took on from the off-season, that went into OTAs. He came in as a man on a mission, he wanted to have the best training camp he's ever had. Then, when we're trying to get 1% better, it may be his footwork, it may be his balance, he has not backed off that. He's continuing to find ways to improve his game and not only has it affected him, it's affected other guys on our team as well.

"I've got a lot of admiration -- it wasn't one thing, but what I can say, that one thing is the length. That's having grit. When you can do something over and over and over again and not back off the passion that you're going after it with."

Ryan is in the Super Bowl. He has won over the Falcons fans and the city of Atlanta. He also has an unlikely supporter: Vick, now retired from the NFL.

This week in The Players' Tribune, Vick revealed he roots for the Falcons and characterizes his relationship with Ryan as "good friendship."

"It hurt when the Falcons drafted Matt," Vick said in the letter on the site. "And for a while there, for sure, I was envious of Matt's position. But Matt being such a success --- that's been a joy for me. For me, that's been relief. It's been peace of mind."

Said Ryan: "Michael has been incredibly supportive of me as I've gotten to know him, as I've gotten older. That support has meant a lot because he is such an icon for the city of Atlanta. He was such a huge part of the sports fabric in that town, and for him to be supportive and help me out in the way that he has throughout my career has been really, really nice."

It's taken some time, but it's finally happened. The spotlight is Ryan's now.