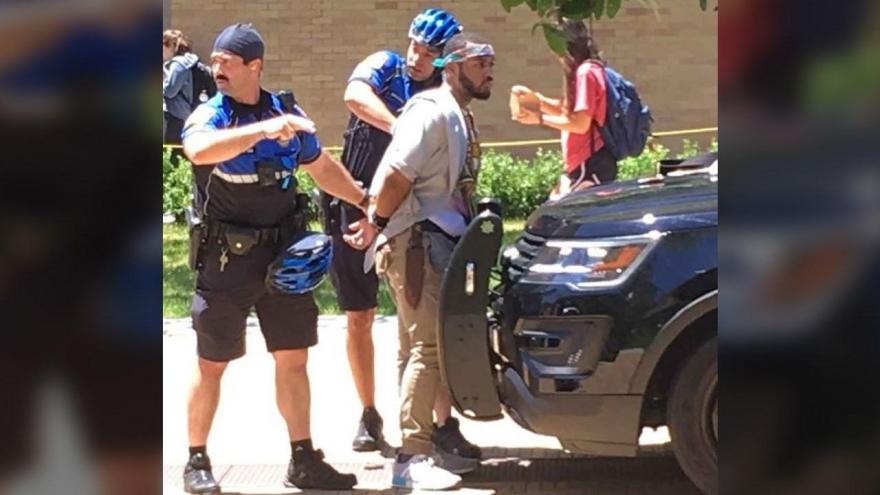 (CNN) -- Police are searching for a motive in a stabbing attack at the University of Texas at Austin that left one student dead and three others hurt.

Armed with a "bowie-style" hunting knife, witnesses and police say a student "calmly walked around" campus Monday afternoon and randomly stabbed other students.

That student is in custody but hasn't been charged, authorities said.

Two hours after the attack, classes and events were canceled on campus but are expected to resume Tuesday.

The first person attacked was one of several students gathered around a popular Austin food truck around 2 p.m. at the plaza outside Gregory Gym, one of the busiest areas on the 431-acre campus.

Rachel Pritchett, a freshman, was in line at the food truck when she heard someone screaming.

"I didn't really process what was happening until he grabbed this guy who was standing right next to me by the shoulder and stabbed him on the back," she told CNN affiliate KEYE.

"While I was running away, I saw this other guy that was kind of bloodied up sitting at a table slumped over. There was someone standing next to him yelling, 'get away!'" she said.

Students leaving their classes also walked upon a gruesome scene.

"Police were resuscitating a victim. Another student had lacerations to their head and was getting help from police," said student Ray Arredondo.

As the attack unfolded, three other students were attacked before police arrived.

"I looked over towards the Gregory Gym area and I just see somebody like passed out on the floor covered in blood," student Bryan Ramirez told CNN affiliate KXAN.

Two students were released from the hospital later Monday.

Responding to the 1:49 p.m. call about a stabbing, campus police saw the suspect walking away from a person lying on the ground, campus police chief David Carter said.

When he was confronted by police, the suspect offered no resistance and complied with the officer's order to get on the ground, Carter said.

Witnesses say he had a "nonchalant" look on his face.

Campus, local and state police swarmed to the plaza. They helped the injured and placed yellow-tape barriers as students called their loved ones.

"There are no words to describe my sense of loss," UT President Gregory L. Fenves said in a message sent to students, faculty and staff.

'A great deal of fear on campus'

Authorities do not believe there is an ongoing threat to the campus community but have increased patrols as a precaution.

"Campus safety is our priority and we will investigate this tragic incident to the greatest extent possible," Fenves said.

In another message, Fenves urged students and staff to support the victims and reassured them that there were no ongoing threats on campus.

"There is a great deal of fear on campus and in our community. That fear is very understandable, especially in light of recent vandalism and threats against students," he said.

Monday's attack comes about a year after the slaying of 18-year-old student Haruka Weiser. The theater and dance student was walking home from class when she was strangled and sexually assaulted. Meechaiel Criner is awaiting trial on charges of capital murder in her death.