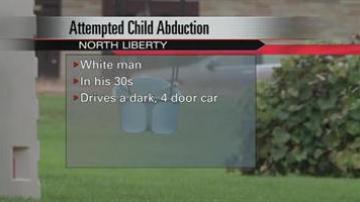 NORTH LIBERTY, Ind. -- For the third time this year, someone tried to abduct a child in Michiana. This time it happened to a 12-year-old boy in North Liberty.

Police say the boy did exactly what he was supposed to do. He ran home as fast as he could.

Police say that may have saved his life.

The suspect is described as a white male in his 30s driving a dark sedan.

Emily Callendar lives near where the incident happened.

"I'm really disappointed that it was in this town because we feel, or we felt safe here, we felt very safe here with our kids," said Callendar.

Callendar says she'll be hugging her kids a little tighter. She can't believe a child was nearly abducted, so close to home.

"That's the shocking part, right out in front of our house and we didn't even know," said Callendar.

Police say the 12-year-old was walking down State Street around 7:30 Sunday evening when a man in a dark car stopped him, just two blocks from home, near the intersection with Wabash Avenue.

It happened on a well lit, busy road lined with houses.

The police department is putting extra officers on the streets, but officer Sawdon says the buck doesn't stop there.

"Being that Halloween is right around the corner, know where your kids are, talk to them about strangers approaching them so they have a plan," said Sawdon.

He says don't wait to talk to them because the second a child gets in the car with a stranger, it may be too late.

If you know anything about this incident or if something similar happened to your kids, contact police immediately.