Attendance for Cubs opening day expected to sell out 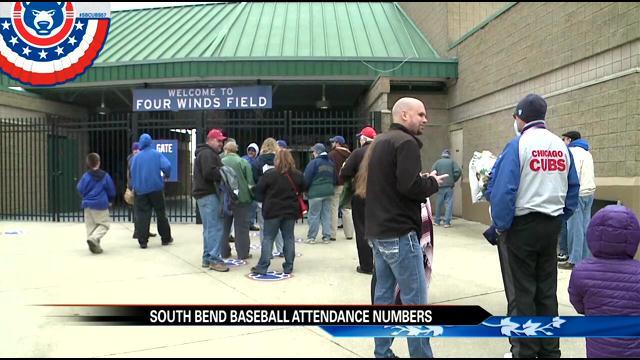 The Cubs presence in South Bend could mean more fans in the stands.

This isn't the first time South Bend's seen an affiliation change. History shows changing teams is one thing that can have an impact on fan turnout.

You may remember back in 1989 South Bend's local minor league team was affiliated with the Chicago Cubs rival White Sox. The White Sox partnership lasted until 1996, and during those 7 years more than 200,000 fans turned out for the games.

The '96 season actually surpassed that with more than 214,000 fans buying tickets that year.

But 1997 brought a big change. The Arizona Diamondbacks laid their claim to South Bend baseball---and fans didn't show up when it came time for the first pitch.

Attendance numbers dropped below 200,000 that season and have not been consistently higher than that ever since.

Could momentum carry into the South Bend Cubs era? team president Joe Hart says it has.

"Our season ticket sales numbers are up 73 percent over last year," said Hart.

"Our South Bend Cubs merchandise is selling all over. We're up 850% over last year."

Fixed seating is sold out for Opening Day, and tickets for the lawn are expected to sell out as well.