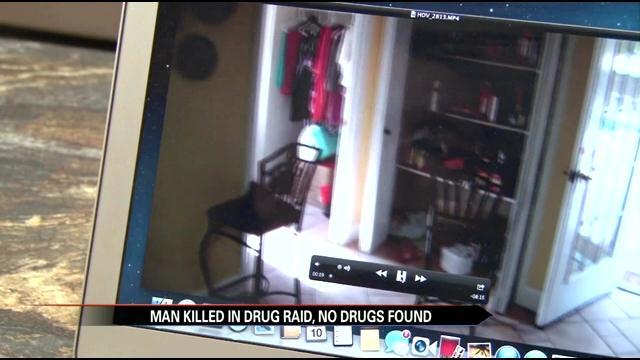 The attorney for the family of a man who was shot and killed by police during a drug raid is asking for the FBI to investigate.

Police say they shot David Hooks during a drug raid in September because he was armed and aggressive.

His attorney is saying no drugs were found during the raid and Hooks was shot in the back while lying face down on the ground.

His wife was home during the raid.

Teresa says she sat outside in handcuffs for two hours after her husband was shot to death.

She says during that time she had to watch her husband on a stretcher without a word from officers about what was going on.

Mitchell Shook, who is representing Hooks' family, says the raid was illegal and he asked the FBI to investigate.

Shook says the officers fired 17 shots inside the home and struck Hooks. He says Hooks had four wounds two of which he says are especially troubling.

"One was to the side of the head, the other, was in his back, the back of his left shoulder, based on the evidence we see, we believe that David Hooks was face down on the ground when he received those last two shots," said Shook.

Leslie thanked everyone in the community for their support.

"Our community has supported us for the most part and we really appreciate that. I think there's been a misconception of us being anti-law enforcement, that's not true, we realize there has to be law enforcement and we respect law enforcement but this was wrong," said Leslie.

"We hope that the district attorney will take all of this into consideration and take this case before the grand jury and do it in a matter where the grand jury hears everything, not just the officer side of the story," said Shook.

The Georgia Bureau of Investigation is investigating the case.

A GBI spokeswoman says they are still waiting for lab results before completing their investigation.

Then the case will be turned over District Attorney Craig Fraser for possible prosecution.