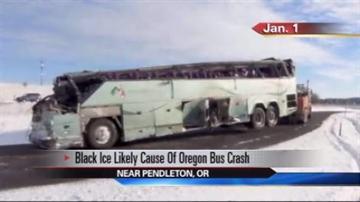 PENDLETON, Ore. — An attorney for the company involved in a deadly crash in Oregon has said that black ice played a "significant role" in the accident.

Nine passengers were killed when a travel bus skidded off an Oregon interstate and into an embankment. Thirty-nine others were injured, including the driver.

The bus company's attorney also said that the driver had more than seven hours of sleep the night before the crash. And there is no indication that drugs or alcohol were involved.