AutoMARK machine makes voting easy for those with disabilities 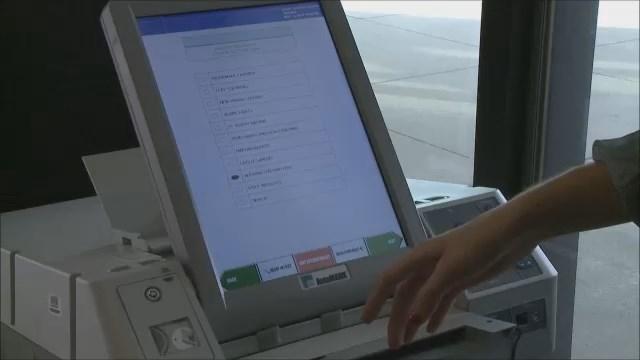 Early voters are coming in droves to the County City Building to cast ballots, but what about handicapped voters who may have a harder time? AutoMARK is the answer and many don’t even know it’ll be at their precinct on Tuesday.

“I don’t think that a lot of people know about it or they would use it,” said Sharon Carr-Eaton, a Voting Machine Demonstrator.

It’s almost Election Day and voters are ready. But for the 33.7 million American voters with disabilities, voting is a bit tougher if you don’t know about the resources being made available - resources like AutoMARK.

“It walks you through everything,” said Carr-Eaton.

Depending on the disability,

“Usually they either can’t walk or they’re in a wheelchair or they’re blind or deaf,” said Carr-Eaton.

You can use headphones or braille to start the process.

“If they’re blind, they have headphones. And if it’s hard for them to see, we can make it black on white. And then we can make the words real large for them,” said Carr-Eaton.

Demonstrators tell me it’s especially accessible for those with wheelchairs. But just in case you still need it,

“They’ll have a judge on either side, Democrat and a Republican, helping them,” said Carr-Eaton.

It only takes about 5 minutes from start to finish.

“Then after they’re done it shoots the ballot back out and then the judges will walk it over and two judges will vote it,” said Carr-Eaton.

The goal with AutoMARK: being part of Election Day.

NOTICE: Demonstrators say AutoMARK will only be available on Election Day, Tuesday, November 8th at your precinct. It is not available yet for early voting.