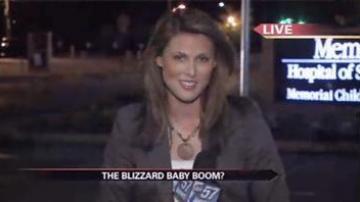 SOUTH BEND, Ind. - Some experts say blizzard baby booms are just myths, but Memorial Hospital says it's prepping to bring a whole lot of babies into the world after Michiana experienced one of its worst winters.

It was the fourth worst winter in Indiana's history and with record snowfall, many couples were stuck in the house with not much to do.

Now doctors and nurses are noticing the impact of those idle, snowy days. Memorial Hospital, in South Bend, says it is not usually busy this time of year in the labor and delivery unit, but they say that is not the case this year.

Christel Aguilar and her husband Daniel are busy getting ready to welcome their little baby boy into the world.

"I can't wait to have him. I have been preparing all this time --- counting down the days."

Christel says they still have a lot of work to do, like finishing up the renovations in their nursery.

"Time is ticking and my husband is a little bit of a procrastinator. I love the man to death, but he just feels like there is just so much time," says Aguilar.

The excited, first-time mother is now seven months along and says she remembers the blast of snow that blanketed Michiana last winter. Now, Christel says its something she will never forget.

"It was horrible! It was absolutely freezing and it dragged on forever, and well, you have to snuggle close to keep warm, you see."

In fact, nurses are being asked to work over-time because the hospital is projecting over 400 babies will be born in just the next two months.

Christel says the news of a blizzard-induced baby boom does not surprise her at all.

"At my second job, at the restaurant, there were five woman total that were pregnant and I was the last on board."

With 105 inches of snow this past winter, it's not hard to see why there was so much snuggling going on.

As for the Aguilars, they will be welcoming their little baby boy into the world come the first week of December.