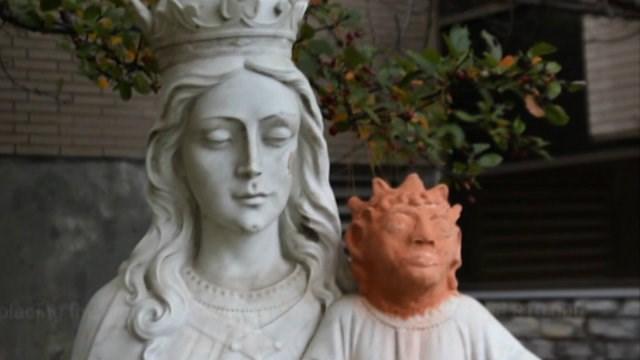 (CNN) -- A baby Jesus statue in a Canadian church has been reunited with its missing head.

That's good news because the replacement head was getting a merciless mocking online.

The statue stands at the Ste Anne des Pins Catholic church in downtown Sudbury, Ontario. It shows Mary holding a baby Jesus in her arms.

The problem is, vandals keep stealing the baby's head.

After the latest theft, a lady brought the missing head to parish priest Gerard Lajeunesse.

"I was told the person [who stole it] has issues, and really, that is all I know," he told CNN. "I have no idea what motivated [them]."

The church had considered replacing the entire statue at a cost of $6,000 to $10,000 but that no longer needs to happen.

It's also a relief because it means the church can finally say goodbye to the hand-crafted substitute that sat atop baby Jesus' body.

The temporary replacement head, crafted from terracotta clay, looked less like the son of Mary and more like the daughter of Marge.

And it was not received well. And that's putting it mildly.

People Photoshopped the terracotta head on to, among other things, ET from the 1982 film, Donald Trump and a previously ridiculed restoration of a fresco painting.

"I am happy about the outcome," said Father Gerald. "I am grateful to the artist. Her work turned heads and the right heads were turned to bring about a good outcome."

But the church isn't leaving anything to chance.

It's going to use a "longer pin in the neck" to make sure no one steals the head again.