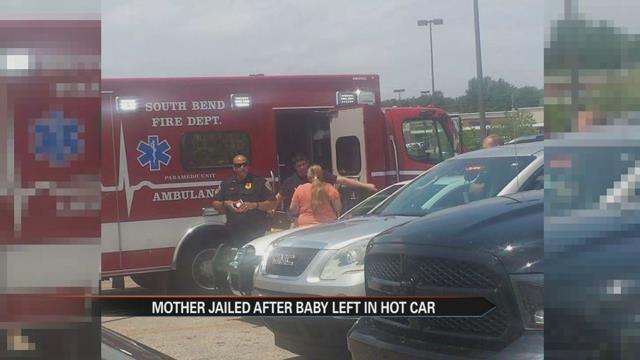 Chaos unfolded outside a South Bend clothing store Sunday afternoon, as police rescued an infant left in an SUV.

"The baby was screaming," Nichole Proctor, who witnessed the incident, said in a phone interview. "The ambulance showed up within minutes, removed the baby, which then I could tell that it was an infant; small, small, very small baby."

The incident unfolded in the parking lot outside the Ross Dress for Less on Ireland Road in South Bend.

Proctor snapped pictures as authorities arrived, including one of the baby's mother running to her car after police got her attention inside the store.

Proctor snapped one photo where the mother held her hands over her face, as the situation escalated and a second, older, child who was with the woman watched.

"She's like, 'Why won't you let me hold him?'" Proctor said. "[The officers] kind of pull her back, she's got her hands over her face and her daughter's crying. Her daughter looked to be about maybe 9 or 10."

Proctor said the infant was taken away in the ambulance and the mother was handcuffed and led away soon after.

Proctor said she doesn't think the infant would've survived had the initial witnesses not called police when they did -- it was about 90 degrees and humid when the incident occurred.