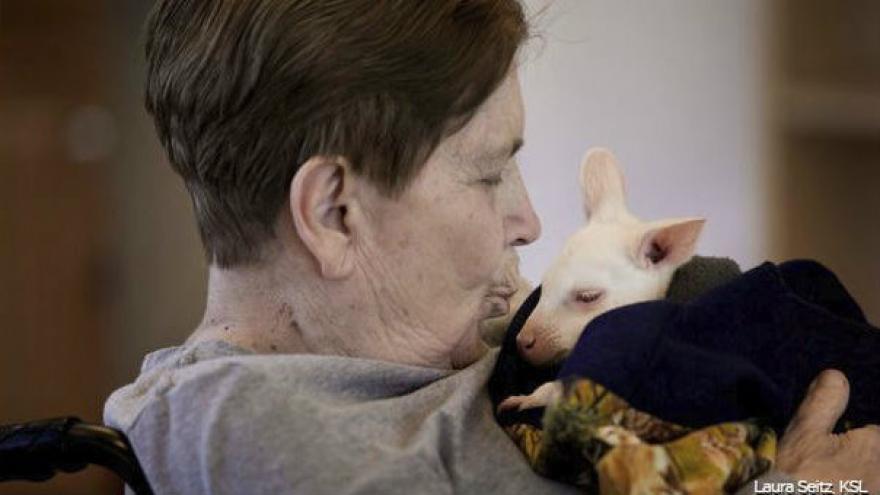 All the while, a smile stretched across his face and adoring giggles escaped his lips. His shoulders shrugged when he'd laugh.

Typically the "story guy" and most eligible bachelor at the William E. Christofferson Salt Lake Veterans Home, Dean was immediately taken by the 2 1/2-pound albino wallaby, who is a new fixture at the nursing home, joining about a dozen other therapy animals there.

"I love that little thing," Dean said. And he wasn't the only one, as veterans in their wheelchairs lined up for a chance to hold the 6-month-old wallaby.

In addition to helping pass the time, caring for and playing with the various animals helps to decrease a person's blood pressure, said nursing home administrator Noralyn Snow. It also gives the 81 resident veterans and their family members who visit something to look forward to.

"We spent generations being afraid of nursing homes and oxygen machines, and this is trying to change that," she said.

"Elsa," as the white-haired wallaby is so affectionately called, is the first wallaby Snow has cared for, but she's "mothered" 19 kangaroos in as many years. She's their "roo Mom," she said.

Snow hauls the wallaby to and from the home every day and keeps it at home at night, even letting it sleep in her bed — to help regulate its temperature.

"It's used to being in its mother's pouch," Snow said, adding that a nursing home, where residents can snuggle and hold the animal all day, is the perfect place for a baby kangaroo.

"When you live in a nursing home, you want it to be as close to living at home as possible," she said. "It should contain spontaneity and love and that's all part of the culture here. No one wants to live in a hospital."

Holding the wallaby reminded Ted Hearne, 69, about his earlier 5-acre homestead in Texas, where he had his own animals, including three dogs.

"It's a good memory. I liked it there," he said. "I like everything about dogs."

In addition to loving, holding and watching the wallaby, residents can feed it, too. Elsa eats a high-protein milk supplement from a bottle with a really long nipple. Because she's so young and still learning to feed, Snow sometimes has to pry the wallaby's tiny mouth open and close it around the bottle.

The baby feeds about every two to three hours when it is so young, even through the night. It also requires an occasional diaper change.

"It's a lot like having a 2-year-old," Snow said, adding that raising a kangaroo, or, in this case, a wallaby, "is a big-time investment."

"It's worth it seeing these great big guys melt to nothing," she said. Snow volunteers the time it takes to care for the macropod typically found in Australia and New Guinea.

Elsa, however, came from The Outback Kangaroo Farm in Arlington, Washington. Snow has flown to pick up the animals there for two decades. She decided on a wallaby this time around because the kangaroos grow to be much bigger by the time she has to take them back to the farm. The wallaby will stay in Salt Lake City until about October.

Other animals at the home include a 20-year-old desert tortoise named Frankie, tropical fish, poison dart frogs, a bearded dragon, birds and the loyal Scottish terrier, Gertrude, who is everyone's friend and will do just about anything for a game of fetch with a tennis ball.

The most unlikely makeshift residents turn stress into smiles, boredom into pleasure and hardship into love, said Snow.

"They cause such joy in this environment," she said.

And the joy is palpable.

Randall Clark could hardly tear himself away from the baby wallaby on his way to lunch Wednesday. The 64-year-old self-described "curmudgeon" was turned to mush as the animal licked his fingers and nuzzled into his arms.

"She's a nice little baby," the veteran said in baby-talk, staring into the wallaby's inviting red eyes. "She's so cute and soft. Such a good baby."