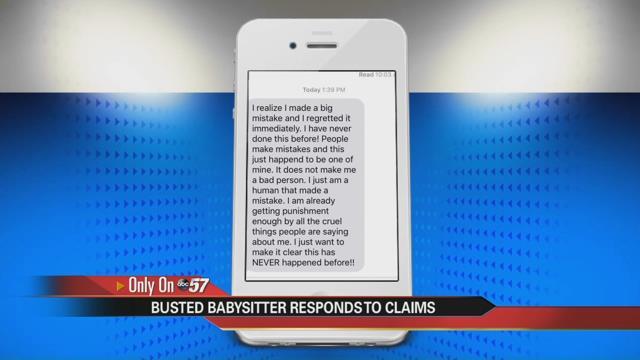 After our original story aired Thursday night, the babysitter accused of leaving two young children home alone tells us she made a mistake.

Osceola mom Sarah Holmes was at work when she discovered the 19-year-old babysitter from Mishawaka had left her sons home alone for over an hour.

Holmes talked about the experience on Facebook in a post that has been shared over a thousand times.

The babysitter was identified in the comments section, with other parents sharing similar experiences.

The babysitter says the backlash she has received has been punishment enough.

“People make mistakes and this just happened to be one of mine. It does not make me a bad person,” the babysitter said in a text message.

She also says she is still employed as a babysitter to other families, a danger Holmes says she is hoping to prevent by sharing her experience.

“You can’t imagine, you know, the panic that goes through your heart when you hear that she’s not here,” said Holmes.

Holmes’ 3 and 5-year-old sons were left alone for over an hour in their home with the door unlocked. One of the boys has autism; Holmes says anything could’ve happened.

“Lesson learned that I need to be a little more careful with my choices of who watches my kids. This can happen to you, to the moms in the area: this isn’t just on TV,” said Holmes.

Lt. Blank couldn’t speak on potential charges against the babysitter because CPS will be the agency to follow up and determine what action, if any, should be taken.

While they can’t stop the Holmes’ former babysitter from taking care of other kids in the meantime, Lt. Blank says parents should always be cautious when it comes to child care.

“You have to treat it almost like a job interview if you will, especially since you’re leaving your precious cargo, your children, with these folks. Definitely doing your research, checking on references, even using the internet to search out any possible things that may have happened in the past,” said Lt. Blank.