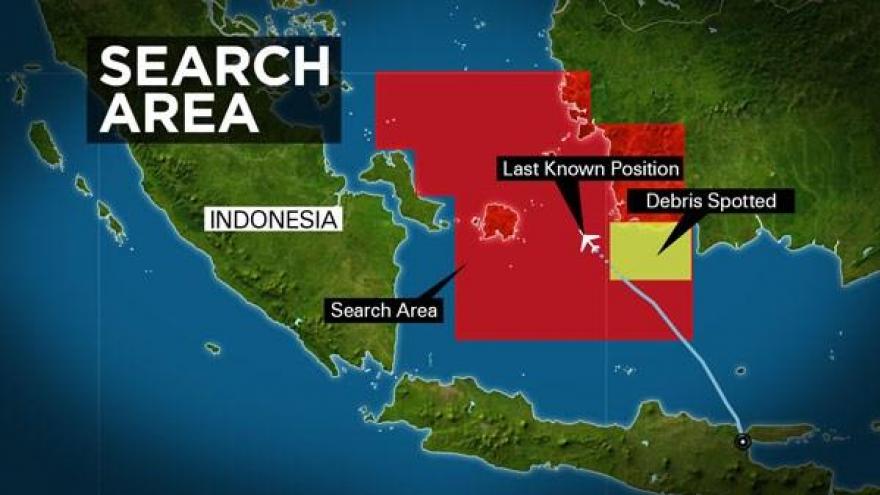 A day after the first bits of debris from the commercial jet were spotted afloat off the coast of Borneo, the search operation was hampered Wednesday by big waves, strong winds and heavy rain. Helicopters scanning for signs of wreckage and victims were halted in their search, while ships continued combing the waters. It was unclear how long aerial operations would be held up.

Answers about why the aircraft, with 162 people on board, fell from the sky Sunday remained elusive.

Among the 10 bodies recovered so far was that of a woman wearing a flight attendant's uniform, said Bambang Soelistyo, Indonesia's national search and rescue chief.

"Reality of seeing the evacuees and some of my aircraft parts are soul destroying," AirAsia CEO Tony Fernandes tweeted.

Sonar may have detected wreckage

There was conflicting information about whether any parts of the plane had been found underwater.

One search official told CNN that he believes sonar equipment has detected wreckage from the plane at the bottom of the sea but couldn't confirm it.

"I think that that's the case," said Hernanto, the head of search and rescue for Surabaya, the Indonesian city where Flight 8501 began its journey Sunday.

But the national search and rescue chief was more cautious.

"Until now, we haven't found the plane," Soelistyo said, according to Indonesia's national news agency Antara.

Search teams are looking for other bodies and parts of the plane, including its so-called black boxes. Those could help investigators determine what went wrong on the flight, which lost contact with air traffic controllers after the pilot asked to change course and move to a higher altitude because of bad weather.

The difficult weather conditions were making it harder to get all the bodies that have been recovered back to land.

Two of the corpses arrived at a hospital in Surabaya on Wednesday afternoon after being airlifted from a city nearer the search site. The bodies were given a solemn welcome by roughly 100 military personnel.

Preparations have been made in Surabaya to receive and identify the human remains in the coming hours and days.

Dozens of ambulances were lined up. On the grounds of a police hospital stood several refrigerated shipping containers where bodies will be stored while awaiting examination. Nearby, tents were pitched with gurneys on hand.

Debris and some bodies were found Tuesday 100 to 200 kilometers (60 to 120 miles) from the aircraft's last known location over the Java Sea, Indonesia's search and rescue agency said.

The news came as a devastating blow for family members of passengers, who had been waiting anxiously for information about their loved ones for days.

The suffering was made worse for some of them, when they saw live television pictures of a corpse in the water.

Families still want and expect regular and full updates from authorities, Suyone Thejakusuma, who said he had relatives and friends on the flight, told CNN on Wednesday. A new information center for families was being set up Wednesday next to a police station in Surabaya.

Several nations are contributing resources to the effort, including the United States, Singapore and Malaysia. The U.S. Navy destroyer USS Sampson is already supporting the search and recovery operations.

The USS Fort Worth is also being prepared to deploy from Singapore, Pentagon spokesman Rear Adm. John Kirby said. It "can be ready to sail in a day or two to get on station and can be there very quickly," he said.

The United States is also preparing maritime patrol aircraft that could help, he said.

The flight, which was lost Sunday on its way to Singapore, was carrying 155 passengers and seven crew members. The overwhelming majority were Indonesians. There were also citizens of Britain, France, Malaysia, Singapore and South Korea aboard.

Trump administration limits non-essential travel between US and Mexico