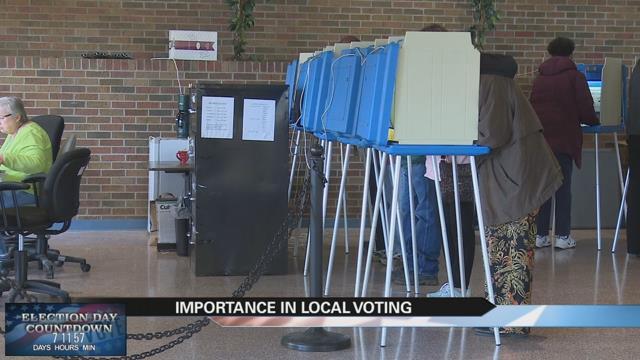 On top of statewide and national elections, voters in St. Joseph County have several contested county races to vote on.

“This is not just a presidential race,” St. Joseph County Chief Deputy Clerk Rita Glenn said. “And actually, your next door neighbor might be a person that’s on the ballot. So you want to pay attention to what’s happening in your backyard.

Early voters in South Bend said on Monday that Glenn’s message is received, but reluctantly so.

“Everything 'county' we voted for,” Dr. John Toepp said, alongside his wife Marilyn.

“It’s not a pleasant atmosphere in any of the races,” Lucy Jones said. “So, I’d rather it was over and done with.”

“This is the worst I’ve ever seen any election since I’ve been voting,” Greg McKeel said. “And I’ve never seen it like this. It’s terrible.”

Voters in St. Joseph County have eight contested county races to decide on:

There are also school board races going on in four districts:

Glenn said there are roughly 6,000 newly-registered voters in St. Joe County since 2012, and about 15,000 votes have already been cast.

“You have to pay attention to what it is that you’re voting with and for,” Glenn said. “We are gonna make sure that your vote does count.”

Glenn also wanted to remind voters that if you choose to pull a straight ticket – meaning you want to vote for every candidate in one particular party – school board races are not included on that ballot because they are non-political; so make sure you still cast a vote for your local school board.

The St. Joseph County GOP and Democrats chairs don't agree on much, but one particular matter brought them together during interviews on Monday.

"Our local races affect our day-to-day living, and so we need to pay attention to those," St. Joseph County GOP Chair Lynn Fitzpatrick said.

"Your local elected officials affect your daily lives more than, you know, you can even make the argument that more than your national ones do," St. Joseph County Democrats Chair Jason Critchlow said.

The two agreed that the county's contested races for county council, county commissioner, and county recorder are ones to watch.

And Critchlow said the race for circuit court judge and the congressional battle between Jackie Walorski and Lynn Coleman is worth keeping an eye on too.

In an election cycle deemed so troublesome, it's often thought voters are looking away, but both chairs said in Michiana, voters are tuning in.

"Some of the call-time scripts that we're using right now are focusing on the local candidates because you're seeing a lot more, sort of, interest in those local candidates," Critchlow said.

"Many, many people that I had no idea came up to me and expressed their support for Republican values and support for the Republican candidates and, honestly, I was really surprised, and I was encouraged by that."