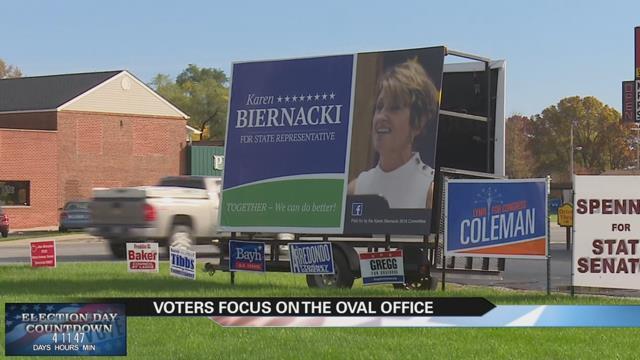 On top of statewide and national elections, voters in Starke County have six local contested races to vote on.

There is a steady stream of early voters in Starke County.

According to Cooley, 1,752 ballots have already been cast in the county as of Thursday.

“I would say [voters] are in tune with wanting to make sure their vote’s counted,” Cooley said.

Some early voters said the local races – which are displayed throughout Starke County on dozens of yard signs – are important to them.

“We’re concerned with the commissioners,” early voter Hiram Noble said. “If we could get our fair share and help our school systems, that’d be awesome. We’re very concerned about that.”

But the majority of early voters interviewed Thursday said one race in particular is what brought them out to the polls.

When asked if there are any county races he’s been watching closely, early voter Gregg Underwood said: “No, I can’t say I have. I do watch the local, but I’m mainly concerned with the presidential and the larger races.”

There are about 18,000 registered voters in Starke County, according to Cooley.

Early voters in Starke County had a lot to say about the race for president.

"I just feel Donald Trump is, to me, a racist," Noble said.

"I think the national elections are getting the most attention," Rice said.