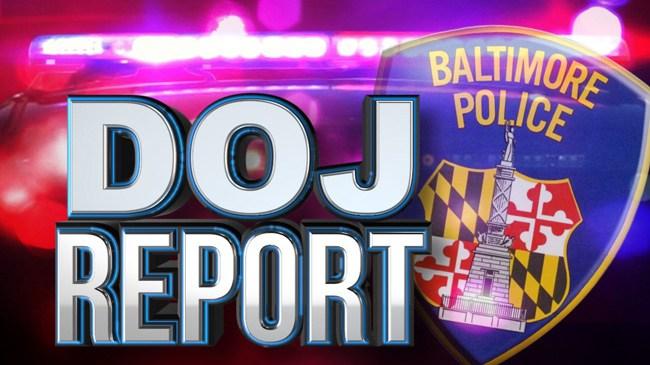 (CNN) -- A Justice Department investigation found that the Baltimore Police Department engages in unconstitutional practices that led to disproportionate rates of stops, searches and arrests of African-Americans, and excessive use of force against juveniles and people with mental health disabilities.

The Department of Justice monitored the department's policing methods for more than a year at the request of the Baltimore Police Department, after the 2015 death of Freddie Gray, who suffered a fatal injury while in police custody.

The report, which covered data from 2010 to 2016 and was obtained Tuesday by CNN, attributed the widespread practices to "systemic deficiencies" in training, policies, supervision and accountability structures.

Though the report does not reference Gray, his death continues to loom large over the city's attempts to heal and rebuild. The federal civil rights report comes weeks after charges were dropped against the remaining officers facing trial in Gray's death.

As a result of the probe, the city and the Justice Department have agreed to negotiate a court-enforceable consent decree that will prescribe steps for reform -- in addition to steps that Baltimore already has taken -- city and federal officials told reporters in Baltimore on Wednesday.

"Change is painful. Growth is painful. But nothing is as painful as being stuck in a place that we do not belong," Police Commissioner Kevin Davis said.

Davis said he would have no tolerance for officers who "choose to engage in racist, sexist , discriminatory or biased-based policing." And he said that officers involved in the most egregious examples noted in the report already have been removed from the job.

He did not identify the officers or say how many officers had been removed because of those cases.

From BPD officers, command staff and union representatives, to city leaders and advocacy groups, everyone who spoke to DOJ investigators acknowledged "significant problems" that undermined efforts to police "constitutionally and effectively," the report said. "Nevertheless, work remains, in part because of the profound lack of trust among these groups."

Here are some of the report's highlights:

Encouraged by BPD supervisors, "zero tolerance" policing continues in certain neighborhoods, leading to unconstitutional stops, searches and arrests, with little to no suspicion, the report said.

• Hundreds of individuals were stopped at least 10 times during this period, and seven were stopped more than 30 times

• Only 3.7% of those stops resulted in citations or arrests

• From 2010 to 2015, prosecutors and booking supervisors rejected more than 11,000 charges made by BPD officers because they lacked probable cause or did not merit prosecution

BPD stops African-American drivers and pedestrians at disproportionate rates, subjecting them to greater rates of searches than whites, the report said, creating racial disparities at every stage of law enforcement actions, from stop to arrest.

"These racial disparities, along with evidence suggesting intentional discrimination, erode the community trust that is critical to effective policing," the report said.

Among the investigation's findings:

• One African-American man in his 50s was stopped 30 times in less than four years; none of the stops resulted in a citation or criminal charge

Use of constitutionally excessive force

After reviewing all deadly force cases from January 2010 to May 1, and a random sample of more than 800 than nondeadly force cases, the DOJ concluded that BPD engages in a pattern or practice of excessive force. Insufficient training and lack of oversight of those incidents perpetuate the pattern, leading to several recurring issues:

• Frequently resorting to physical force when a person does not immediately respond to verbal commands, even if the subject poses no imminent threat to the officer or others

• Due to a lack of training and improper tactics, BPD officers end up in needlessly violent confrontations with people with mental health disabilities

• Failure to use widely accepted tactics for dealing with juveniles, treating them the same way as adults, leading to unnecessary conflict

Retaliation for activities protected by the First Amendment

• Unlawfully stopping and arresting people for cursing at officers, even though it's not illegal to use vulgar or offensive language as long as they are not "fighting words"

• Retaliating with excessive force against people in cases of protected speech

• Interfering with people who record police activity, including a time in which officers seized the phone of a man who recorded his friend being arrested and deleted all the videos on his phone, even personal videos of his son

The report concludes that BPD "seriously and systematically under-investigates" sexual assault reports and engages in practices that "compromise the effectiveness and impartiality" of their investigations. Among the examples cited:

• In interviews with women, officers ask questions or make statements in a manner that places blame on them, such as "why are you messing that guy's life up"? or suggesting their behavior invited the assault

• An email between an officer and a prosecutor expressing disbelief of a survivor, calling her a "conniving little whore"

• Allegations of disparaging and inappropriate comments toward transgender individuals, including the refusal to call a transgender woman a woman

The report dedicates significant space to the department's failure to train, equip, supervise and hold officers accountable, or to build relationships with the community.

"Numerous members of BPD, from line officers to command staff to training personnel, conveyed to us that training is not a priority within the Department," the report says.

The department also fails to collect and record important data on a broad range of activities that could inform their processes, the report said. And when it does, it does not use the data to manage and supervise officer activity.

The police department already is making or has made changes to key policies, including those on how officers are trained, Mayor Stephanie Rawlings-Blake said Wednesday.

"The findings are challenging to hear," but the report and the coming consent decree will help the Baltimore Police Department make further changes that will help build trust between police and the community, Rawlings-Blake said.

Asked how much the changes will cost, the mayor said she anticipates it to be between $5 million and $10 million annually -- similar to what other cities making these types of moves have paid -- and that she expects to put the city in a position to meet the expense.

On Tuesday, Baltimore State's Attorney Marilyn J. Mosby anticipated that the report "will likely confirm what many in our city already know or have experienced firsthand."

"While the vast majority of Baltimore City Police officers are good officers, we also know that there are bad officers and that the department has routinely failed to oversee, train or hold bad actors accountable."

Davis, the police commissioner, told The Baltimore Sun that the report will help them improve.

"We have begun this journey to reform long-standing issues in many real, tangible ways," Davis said. "DOJ's findings will serve to solidify our road map."